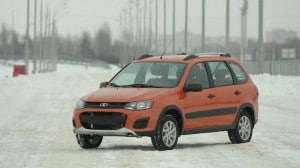 AvtoVAZ Lada brand is one of the best-sellers in a weak Russian auto market.

In a stark contrast to auto sales in the U.S., which are heating up, new car sales in Russia have been dropping like a stone with no expected end to the fall in sight.

The light vehicle market posted its biggest monthly decline in Russia in about five years in March when it slid 42.5%, according to the Association of European Business. Through the first quarter of 2015, sales in the country are down 36.3% compared with year-ago figures.

When examining automaker results, seeing what company performed best is a matter of which company lost the least, which in the case of March was Mercedes-Benz at 3%. AvtoVAZ’s Lada brand shrank 26% last month, Hyundai had the best month, falling just 15%. Kia lost 32% and Volkswagen fell 47%.

The Russian light-vehicle market is currently undergoing something of an existential crisis as a unique combination of macroeconomic and political circumstances are completely undermining any possibility of positive sales growth in the market, according to IHS Automotive.

A weak rouble pushes the price of imports and replacement parts. The rising prices as well as uncertain economy is wreaking havoc with consumer confidence. The Russian government is attempting to be proactive by offering some help with loans

“Some customers have probably been waiting for the loan subsidy program, which started on April 1,” said Svyatoslav Kuchko, IHS Automotive’s Russian market analyst for automotive forecasting.

He believs that March will be rock bottom for the Russian market.

“In the coming months the market will continue to fall but not at such an accelerated rate,” he said in a statement. “Firstly, the comparison base will be lower (in April 2014 a noticeable market decline in Russia began). Secondly, the loan subsidy program is expected to support the demand. Besides the inflation, which was galloping in the beginning of the year, is slowing down and the ruble exchange rate is currently improving.”

(Click Here for details how that self-driving car may make you car sick.)

In addition, the board of the Central Bank of Russia is expected to consider a move to lower interest rates. If that happens, it could make borrowing to buy buy a new vehicle a viable option for many consumers.

He notes there “is still much pessimism regarding the medium- and long-term prospects for the Russian market, highlighted by General Motors’ decision to withdraw from the market as a full-range, volume manufacturer at the end of the year, despite being one of the market leaders until a few years ago.”

For the full year IHS Automotive’s light-vehicle forecast stands at 1.81 million units, a decline of 27.4%.