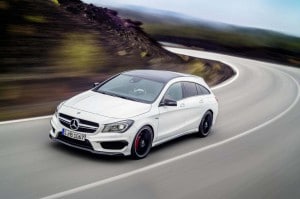 With a flood of new products coming to showrooms, and strong demand building in key markets such as the U.S., Europe and China, Mercedes-Benz set an all-time monthly sales record last month.

The luxury arm of Germany’s Daimler AG said it met demand for 183,467 vehicles in March, a strong 15.7% increase from the same month a year before.  Mercedes says it also had its best first quarter ever.

“These successful results are due in no small part to the product offensive we continued to drive forward in March,” declared Ola Källenius, the Daimler board member responsible for Mercedes-Benz Cars Marketing & Sales.

Mercedes reported record sales in virtually all of its markets, including Europe which is just beginning to revive after a long economic downturn. Buyers there purchased 89,041 vehicles last month, a 16.3% increase.

(Click Herefor a first look at the new 2016 Mercedes-Benz GLE.)

China reported a 20.8% jump, also setting a record. That was particularly good news for Mercedes as the company is rebounding from several years of trouble in the booming Chinese market that saw it order a major shake-up of its management team there.

The entire NAFTA region saw sales jump 9.1%, to a new record, with demand in the U.S. up 9.2%, to a record 29,921 Mercedes-Benz cars, trucks and crossovers. Mercedes was the number one luxury brand in the U.S. last year but remains in a tight battle with competitors BMW and Lexus for dominance in 2015.

A variety of models have been setting records in recent months, including the flagship Mercedes-Benz S-Class, the most popular premium luxury nameplate in the world.

(Daimler teaming up with Nissan to develop new luxury pickup. Click Here for the latest.)

Källenius said the automaker is looking to build more momentum in the months ahead as it continues to roll out new products like the CLA Shooting Brake, a wagon that reached European showrooms on March 28th.

Mercedes introduced a critical new offering at the New York International Auto Show last week. The 2016 Mercedes-Benz GLE will replace the old M-Class, its mid-range utility vehicle, which is produced in a plant near Tuscaloosa, Alabama.

Mercedes today announced five new versions of its C-Class line-up. The C-Class was named World Car of the Year during a ceremony in New York last week. In fact, the maker had a finalist in all five categories of the competition and pulled a hat trick by winning three.

The latest news should build support for Dieter Zetsche, the mustachioed CEO of parent Daimler AG. He has often been criticized by Daimler shareholders for not driving up the maker’s stock price and lagging some key rivals in terms of profit margins. But the company’s board last week approved extending his contract through at least 2019. Zetsche took over the CEO job in 2006, replacing the controversial Juergen Schrempp. Schrempp was the architect of the abortive Daimler Chrysler “merger of equals,” and Zetsche had previously run the U.S. operation.