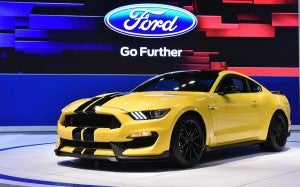 They’ll be fast on the track, but the 2015 Shelby GT350R could be even faster launching out of the showroom.

To mark the 50th anniversary of the Shelby, the maker plans to produce just 37 of the track-ready models in what it calls a tribute to legendary racer and entrepreneur Carroll Shelby.

Ford also plans a relatively limited run of Shelby GT350s wearing a 2015 badge, commemorating the first model to roll out in January 1965. That original helped transform the image of the first Mustang, and Ford is looking at the latest GT350 as a way to maintain that halo with the all-new pony car that debuted last year.

While Ford isn’t officially announcing pricing for the Shelby models, a report on AutoBlog suggested that leaked Ford data indicated half of the 100 GT350s to be badged as 2015s will get a $7,500 Technology Package. The other 50 will be fitted with the $6,500 Track Package. Both packages will include such useful features as magnetic ride control, selectable drive control and additional engine, oil, transmission and differential coolers.

For those who might be a bit confused by the all the numbers, Ford unveiled the latest Shelby GT350 at the Los Angeles Auto Show last autumn, following it up with the Shelby GT350R in January at the Detroit Auto Show.

Both add plenty of performance features to the base Mustang which was completely redesigned in time for its own 50th birthday last year. The two Shelby models get plenty of performance features, including a new flat-crank V-8 expected to deliver in excess of 500-horsepower, as well as those magnetorheological shock absorbers which can respond to road conditions and driver input in mere milliseconds.

The new Shelby models were both supposed to be 2016 models, but Ford has decided it will issue a handful badged as 2015 models to celebrate the original muscle car and honor Carroll Shelby who spent much of the last half century paired with Ford. His Las Vegas-based company continues to partner with the Blue Oval on the new model.