Honda delivers some big things in its small CUV package. 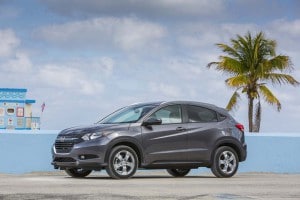 The 2016 Honda HR-V shares the basic architecture first introduced on the Fit hatchback.

Small, smaller, smallest. Like a growing number of its competitors, Honda has been both refreshing and fleshing out its utility vehicle line-up. And even as it prepares to launch an updated version of its biggest model, the Pilot, it’s entering an all-new segment with the pint-sized 2016 Honda HR-V.

What was once a modest niche is rapidly becoming one of the market’s hottest segments with new offerings such as the Chevrolet Trax, Jeep Renegade and Fiat 500X joining earlier entries like the Nissan Juke and Kia Soul. Honda, however, has big plans for the smallest of its utility vehicles, hoping to dominate the market much as it has with bigger offerings like the Pilot and mid-range CR-V.

Sharing the same Mexican assembly line as the familiar Honda Fit, the 2016 HR-V also shares the same underlying platform as that latest-generation minicar. That’s good news for those who believe that good things come in small packages, yielding a flexible and roomy interior that will surprise those who expected a cramped interior with little space for either passengers or cargo.

While the Fit and HR-V start out with the same architecture, the utility vehicle has been stretched by a foot, coming in at 169.1 inches, nose-to-tail. It also rides a bit taller than the Fit hatchback. But while it does boast a bit more ground clearance and optional all-wheel-drive, this is a soft-roader aimed at young urban adventurers, rather than anyone looking for serious offroading. 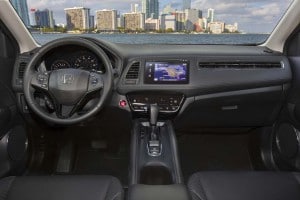 A nice, well-executed interior but where's the volume control knob?

That said, this should precisely meet the needs of the vast majority of the estimated 236,000 buyers expected to enter the B-Class crossover market this year, about twice the total sales volume in 2014, according to a forecast by AutoPacific, Inc. The base price of $19,995 – including delivery charges – should further enhance the 2016 Honda HR-V’s appeal.

During a drive of the new HR-V in Miami we found the crossover more attractive than it appears in photos, perhaps reflecting the way a lens can exaggerate the vehicle’s dimensions, making it appear both shorter and taller at the same time.

There are a few odd details, including the cutline of the hood which seems to rise high over the front fenders. Honda designers appear to have wanted to give the HR-V a more taut and muscular appearance with hood creases and bulging wheel wells.

On the whole, it has plenty of character while not taking things to the extremes seen with some other compact CUVs, such as the Juke, Renegade and 500X.

(Click Here for a close-up of the new Honda Pilot.) 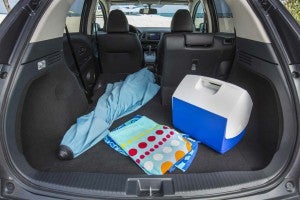 The interior will quickly remind Honda fans of the Fit. At this price, one wouldn’t expect leather and wood, so one also shouldn’t be disappointed by the plastic and fabric finishes which, on the whole, are attractive and well executed, with soft-touch panels where you’d expect them.

There are several notable changes from the Fit, including some extra storage built into the center console, as well as the distinctive, grid-shaped air vents on the passenger side of the instrument panel.

There’s also a large touchscreen display atop the center console that can be fitted with a reasonably easy-to-use navigation system on higher trim levels. The display is finished in a glossy piano black and incorporates various controls, including volume. And that leads us to one of our biggest complaints about the latest crop of Honda products.

Touch sliders simply don’t cut it. There is absolutely no justification for leaving out a traditional volume control knob – as well as one for tuning the radio. None. This fixation on touchscreen controls may satisfy the geeks in the electronics department but no one else, from what we can determine. Forget manual transmissions, if you must. Save the knob! 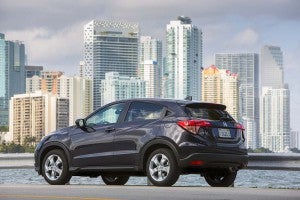 Safety features include the Honda-exclusive LaneWatch system which uses a camera to show whether there’s another vehicle in the HR-V’s blind spot, the image popping up on the touchscreen display. The downside is that the system does not monitor the driver’s side blind spot.

The seats – available in heated leather in upscale models – are adequately comfortable, if not especially impressive. It’s what you can do with those seats that will be the real crowd pleaser. Like the smaller Fit, the 2016 Honda HR-V uses its “Magic Seats” to great purpose. They can fold, tumble and split in a variety of configurations. If you’re sitting in back, you can relish the nearly 40 inches of legroom. Yet, if you’re hauling cargo, you’ll squeeze a maximum 58.8 cubic feet of stuff inside.

With Miami’s heavy traffic and flat terrain we had less of an opportunity than we might have liked to put the 2016 Honda HR-V through its paces, but we jammed in enough seat time to get to enjoy the crossover’s driving dynamics. While it’s not as sporty as a Mazda CX-3, it’s a lot more fun to drive than a Chevrolet Trax. And while it won’t give you quite the go-anywhere capabilities of a Jeep Renegade with the Trailhawk package, the HR-V should do well on rough roads, snowy streets and the occasional jaunt down a gravel trail. 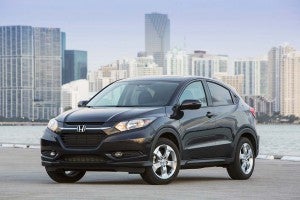 Steering is similar to the Honda Fit: direct, reasonably responsive and offering good road feedback. Where the HR-V has its hatchback sibling beat is its performance. The CUV borrow’ the Civic’s 141-horsepower inline-four, rather than Fit’s sluggish 1.5-liter package. Most shoppers will likely order it mated to the Honda continuously variable transmission. While we’re not big fans of CVTs, Honda’s exhibits little of the rubber-banding we’ve come to expect from other maker’s systems. And it does yield a reasonably good 28 mpg City, 35 Highway and 31 Combined in front-drive configuration. That dips to 27/32/29 in all-wheel-drive.

Honda is also offering the HR-V with a six-speed manual, albeit only on the front-drive model in LX and EX trim. Sadly, it seems to be targeting price-conscious buyers rather than those who want sporty manners and go-anywhere capabilities.

(Click Here to learn where the “greenest” American car shoppers come from.)

Honda has scored a hit with the latest-generation Fit, and if our first drive of the 2016 Honda HR-V is any indication, we expect buyers will respond with equal enthusiasm to the new crossover as it starts rolling into U.S. showrooms in the coming weeks. It’s one of the main reasons forecasters are likely to be right when they forecast big growth to come in the compact CUV segment.