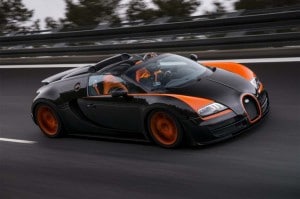 Bugatti is replacing its Veyron Grand Sport Vitesse with a hybrid named the Chiron.

There are plenty of cars that post zero-to-100 km times in the four second range. Real speed comes in the low-three to high-two second span and now Bugatti’s looking to take that a notch lower: two seconds flat.

The Chiron, which is the replacement for the Veyron, is said to be putting out 1,500 horsepower and 1,100 ft-lb of torque. That would be 0.4 seconds faster than the Vitesse version. It also puts some distance between it and the Ferrari LaFerrari (0.5 seconds faster), the McLaren P1 (0.6 faster) and the Porsch 918 Wessach (0.9 seconds faster).

The new model is nearly completely new from the ground up: 92% of the components are new or updated. The result may be a lighter vehicle with better handling even though it looks very much like its predecessor.

Another change is the use of electric turbo engines on the wheels, which help boost the power, but they also in concert with cylinder deactivation and direct injection improve the car’s mileage to 14 mpg. The Veyron got an EPA rating of 10 mpg.

Fear not those who love the sound and smell of a furiously high-powered gas engine, the Veyron’s successor only has those electric motors working with an 8.0-liter quad-turbo W16 engine: the same as the Veyron.

However, it only put out 1,200 in Super Sport and Vitesse mode and “just” 1,000 hp as the Grand Sport. The new model is expected to top out at 288 mph, which is faster than any Bugatti ever.

While the zero-to-100 km time is eye-popping, the top end time will still have competition. Koenigsegg promised to take the lead when it rolls out its all-new “megacar,” the Regara. Koenigsegg isn’t offering many details, suggesting only that the Regara “will reign as the king of the road, as the fastest accelerating, most powerful production car ever.”

The “not a hybrid” is, well, a hybrid using a combination of electric motors and an internal combustion engine to produce “at least” 1,500 hp and 1,475 ft-lb of torque. It’s hit 248 mph, but what the top end is, no one is sure.

(To see more about end of a “Legend” at Bugatti, Click Here.)

However, the Koenigsegg One:1 is now rated at 1340 horsepower and with all of its carbon fiber and other light-weighting efforts is thought to be able to hit 280 mph…but it hasn’t yet.