The 10 Weirdest Automotive Accessories Ever

JC Whitney combs through a century of parts catalogs. 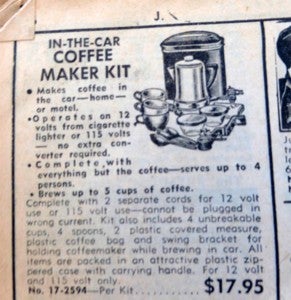 Need a cup of coffee on the way to work? No problem! The In-the-Car Coffee Maker Kit could be had for just $17.95.

Blinking cats eyes, fuzzy car muffs and gyroscopic stabilizers. One thing you can say about the auto industry: it encourages inventors and entrepreneurs to come up with some wild, weird and wacky ideas.

And they have routinely found a place to bring them to market in the pages of the JC Whitney catalog. Established in 1915, at a time when there were hundreds of different brands vying for the attention of American drivers, Whitney today claims to provide “everything automotive,” as the self-described “largest direct marketer of name-brand automotive parts and accessories.”

Both online and in its classic print calendar it offers about 1.2 million parts for over 25 million different vehicles. That list has, over the years, included some truly odd ones which Whitney archivists uncovered in an effort to celebrate the company’s centennial.

In hindsight, some items on the list aren’t as strange as they first might seem. Okay, putting a stuffed animal with blinking lights in the back window might seem odd, but it actually presages by decades the so-called CHMSL, or high-mounted brake light, today required by law. And, yes, trying to play a record in a moving – and often bouncing – car is an exercise in vinyl-scratching futility, it was also a sign of things to come, today’s cars loaded with USB ports and Bluetooth links to your portable music players. 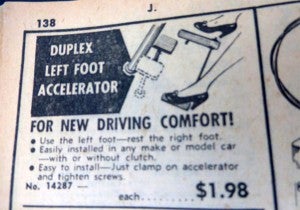 The JC Whitney catalog was often filled with unique automotive accessories, such as the left foot accelerator pedal.

And that in-car coffee-maker? The folks at Fiat recently offered a more stylish espresso maker in one of their European models. So, who says bad, er, good ideas don’t stick around?

Here’s a list of the 10 oddest accessories JC Whitney has ever offered:

1)      Even before carmakers began offering talking cars in the ‘80s to tell you, “Your door is ajar,” the Whitney catalog was offering a melodic accessory that would play one of four tunes, including “Ave Maria,” and “Let Me Call You Sweetheart.” Back in the ‘60s, this went for $4.98.

2)      Considering the depth of this year’s cold snap, the Fuzzy Car Muffs the Whitney catalog once offered is starting to make sense. Billed as a “countrywide rage,” you could wrap fuzzy white fur over your mirrors, horn rings and visors. Another ‘60s oddity, these went for $0.79 to $1.50.

3)      What did they think when early automotive tinkerers brought their tube radios into their cars? So what was so odd when Whitney began offering a dashboard-mounted record player – just because it was likely to skip and scratch whenever a car hit a pothole or made a sharp turn? Whitney offered various versions for decades, but the one from the ‘60s went for $59.95. 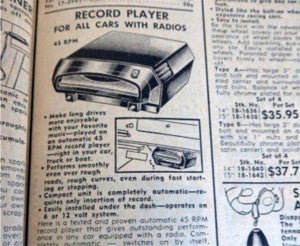 A precursor to the in-car CD player, the record player for the car was another item that could be purchased through the JC Whitney catalog.

4)      Long before you could catch every big race on one of your 500 cable channels – or record them at the track using your smartphone, Whitney offered what its archivists call “the precursor to the audiobook,” actual recordings of famous races like Le Mans. There were also records of ‘60s-era driving greats like Carroll Shelby and Sterling Moss. At $5.00 to $5.95, a perfect accompaniment to your in-car record player.

5)      The Whitney catalog often gave us ideas that were just a wee bit ahead of their time, like the Automotive Radio Phone and Accessories. Even before CB radio, you could equip your car with a low-power, two-way radio system “to conduct business and stay in touch with family.” The price was a hefty $169, however.

6)      The JC Whitney catalog often included fantastic claims for items that could turn water into fuel or help increase tire life, balance wheels and iron out bumpy roads. In the post-war years, when anything sounded scientific was sure to sell, the catalog offered Gyroscopic Stabilizers to mount on each wheel. A pair cost $19.95.

7)      Tired of having to constantly reach over to change radio stations? Let your foot do all the work with a Foot Operated Radio Selection Switch for $2.95. They just put this in the wrong place. Most of today’s cars come with buttons on the steering wheel to change stations, as well as to adjust volume. 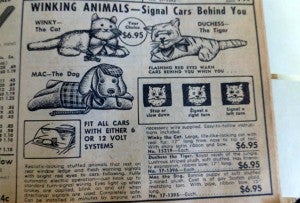 Nothing like a winking animal to inform other drivers that you are planning to stop or turn.

8)      After using your foot to not only operate the accelerator but also change stations, it might get tired, as well. So Whitney once offered the Deluxe Left Foot Accelerator, boasting benefits like “Rest the right foot” and “easily install on any make or model car…with or without a clutch.” It cost a driver $3.98.

9)      Had to rush out to get to work on time? Not enough time to brew a fresh cuppa Joe? Not a problem. For $17, JC Whitney would sell you a kit that could turn you into a mobile barrista long before Starbucks arrived. The kit would make four cups of coffee at a time but, sadly, it apparently couldn’t deliver a chocolatta mocha, skinny frapuccino with the cool design on top.

10)    Sometimes, we wonder whether the folks at the National Highway Traffic Safety Administration had a division just to follow the Whitney catalog’s major safety breakthroughs. Long before the feds began requiring third brake lights, the folks from Whitney had Winky, Duchess and Mac, plush animals whose eyes would light up when you hit the brake, or blink when you were set to make a turn. Back in the ‘60s, they each went for $6.95, but they stuck around in the catalog until 1987.

(The big question at the Geneva Motor Show: will Google or Apple be allies or adversaries? To find out, Click Here.)