The 10 Most Annoying Car Features 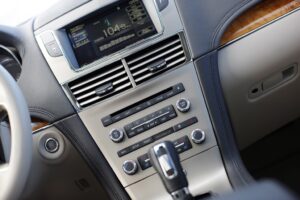 Lincoln has been hammered in recent studies because of problems with its touchscreens.

Love that new car? Plenty of storage space, good performance, great mileage? You’re still likely to find something about it that will make you grind your teeth, perhaps the lack of useful cupholders, a glovebox that invariably bangs your knees or a touchscreen audio system that makes it a chore to simply change radio stations.

A poorly designed interior is one of the things most likely to send you running when you go looking for a new car, truck or crossover. But other things, like car alarms that randomly go off in the middle of the night, can add to your frustration.

The editors at online shopping service Cars.com have set out their own list of the 10 most annoying car features. We’ll add a few of our own and invite readers to weigh in with their own.

“Over time, we’ve developed some serious frustration with certain features, even those you might not expect,” explained Dave Thomas, Cars.com Managing Editor.

(Ford designers want to mine your mind – using eye-tracking and brainwave scans to see what features turn buyers on or off. Click Here for more.)

In many cases, you can spot a potential annoyance simply by visiting the showroom and taking a vehicle for a test drive. Sadly, many of the more annoying features – like those overactive car alarms – may not be apparent until you’ve driven home and lived with the new vehicle for awhile. 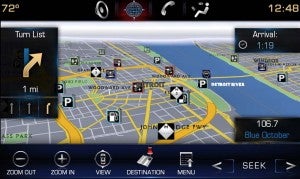 Why can't your passenger program the Caddy Cue navigation system while you drive?

The top pick? Touch-sensitive controls. No surprise here. According to J.D. Power and other researchers, balky touchscreen controls now cause more gripes among new vehicle owners than just about anything else. With some vehicles, the problem is with displays that are either too sensitive to the touch while others require you to pound on the screen.

Touchscreens also come in as the second biggest annoyance for Cars.com editors. In this case where manufacturers decide to replace perfectly useful knobs and switches with video displays that require you to dig down through several screens just to turn off your seat heaters or change a station something that can “turn simple tasks into a multistep process (that) can be quite frustrating,” the editors kvetched.

Not surprising, then, that they also found annoying the use of tuning buttons instead of knobs. We agree that knobs are the simplest way to tune a radio – and add the same goes for changing volume. Why, for example, did Cadillac opt for a touch-slider control on its new Cue infotainment system? It often lags behind so the radio continues to get louder after you take your finger away.

4) Navigation systems that won’t even let passengers program them when the vehicle is in motion;

5) Giant Key Fobs that are either too big or too heavy to carry in a pocket;

6) Square Cupholders. Okay, we get the idea of a juice box in the back of a minivan, but the square hole isn’t easy to use with the round peg of a soft drink bottle;

7) Auto Stop/Start. Some studies suggest this technology can boost mileage by 5% or so, but it can also make you crazy having your engine shut off, start and shut off again waiting at a light, especially on poorly executed systems;

8) Voice-Controlled Systems. “The concept is great, but these systems have proven to be largely incapable of understanding what you’re saying, making the experience frustrating and usually not worthwhile,” laments Cars.com;

9) Car Alarms. Do we need to say more? Have they ever actually stopped a car thief? Or do they only wake up the neighbors in the middle of the night?

10) Small Side Mirrors. Sure, they meet the letter of the law, but they can be largely useless.

To this list we’ll add those poorly designed gloveboxes that can’t be opened if someone is actually sitting in the passenger seat. And how about seatbelts mounted so far behind you that it takes yoga training to reach them when you’re ready to buckle up?

The good news is that automakers insist they’re listening to consumer complaints and trying to address annoyances like these.

(Millions of vehicles may be vulnerable to hackers, warns new report. Click Here for the full story.)