Out of dozens of debuts, these are the real standouts. 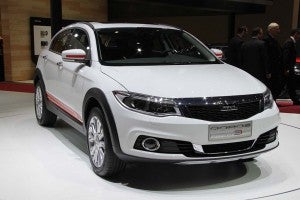 Automakers from around the world, like China's Qoros, flock to the Geneva Motor Show.

The 2015 Geneva Motor Show is over. Well, the press days are, with the doors of Geneva’s PALExpo convention center now open to the public.

The annual event is widely considered one of the world’s most important auto shows, and for good reason considering the vast number of brands on display. Add the huge number of European and global debuts – by one count more than 100 if you include those from the more obscure participants like Switzerland’s own Rinnspeed, and suppliers like Magna.

There were plenty of odd new cars and concepts, even a couple downright awful ones. But, on the whole, the 2015 Geneva Motor Show brought out some that were striking, intriguing and likely to be influential over the long-run. Here’s our list of the 10 Best Debuts at this year’s show:

Aston Martin Vulcan. In Roman mythology, Vulcan was the god of armor and fire, his forge shooting flames out from Mt. Aetna. In the hands of Aston Martin, Vulcan’s flames flare from its side-exit exhaust pipes. The Vulcan is so gorgeous we’d love to park it in our driveway for the world to see. But alas, it is destined solely for racing. The good news is that the British maker plans to include lessons and track time in the $2.33 million price tag.

Audi Prologue Avant. The follow-up to the L.A. Auto Show’s Audi Prologue Coupe, the Prologue Avent shows off Audi’s distinctive new design language in a wagon form, and it is expected to be equally influential when it comes to the maker’s future product line-up. That’s true for the more minimalist interior of the Prologue Avant, as well. The wagon version features a 3.0-liter biturbo plug-in hybrid drivetrain that can launch from 0-60 in 5.1 seconds but still get 33 miles on battery power.

Bentley EXP 10 Speed 6.This true two-seater is aimed to show Bentley can take dead aim at such performance stalwarts as Ferrari, Lamborghini and Aston. A $185,000 production model is expected to arrive in around three years. It will be sleeker, lighter and more modern than the British maker’s traditional offerings, which look like they might be comfortable parked in the carriage house at Downton Abbey. The basic design language should extend to other future Bentleys.

Hyundai Tucson. With a sleeker design that moves even further away from the classic, boxy SUV look of earlier versions, the 2016 Tucson is aimed at building Hyundai’s share of the booming global utility vehicle market. The remake comes in surprisingly short order considering the last major update came in 2010. It will offer a wide variety of new safety, comfort and convenience technologies, as well as conventional and alternative powertrains including battery and hydrogen options.

Infiniti QX30. Officially, what the maker revealed is a “concept vehicle.” But what we see is darn close to what you’ll get when the new compact crossover hits showrooms later this year. The design is quite close to that of the Q30 hatchback that will also join the Infiniti line, with the QX getting a more rugged appearance suggesting at least some off-road capabilities. Both models, incidentally, share their underlying platforms with several small products from alliance partner Mercedes-Benz.

Kia Sportspace. While this beautifully sculpted concept vehicle is clearly aimed at the European market, where wagons remain a highly popular body style, Americans motorists should take a close look. Expect to see only a few modest changes when the production design reaches showrooms later this year, as the next Kia Optima. While we’d love to see the wagon come to the U.S., expect to see only a sedan version arrive State-side. A production version of the concept’s hybrid system may be in the plans, however.

Koenigsegg Regera. How can one argue with a car making 1,500 horsepower, and whose name, in Swedish, means “to reign.” The follow-up to Koenigsegg’s One:1 pairs its big gas engines with three electric motors and the combination is overwhelming. Forget 0 to 60 times. The Regera will hit a blinding 250 mph in a mere 20 seconds. Billed as the world’s “first fully robotized car,” virtually everything, including the butterfly doors, can be operated from a smartphone app.

Nissan Sway. The Japanese maker is determined to prove that big things really can come in small packages with this concept vehicle expected to soon replace the pint-sized Nissan Micra. But the overall look offers a hint of where the rest of the maker’s line-up will go stylistically. Among the most notable details, Sway gets a more aggressive version of Nissan’s V-Motion grille, as well as red-tipped side strakes and more distinctive headlights framed by eyebrow-style daytime running lamps.

Porsche Cayman GT4. The maker’s first GT model based on a mid-engine coupe, the new Cayman GT4 turned an impressive seven minute 40 second lap on the ‘Ring’s North Loop. That’s in line with what the previous generation Porsche 911 GT3 was able to accomplish. To get there, Porsche turns to a 385 horsepower 3.8-liter flat-six engine originally developed for the bigger 911 Carrera S. Exterior changes are all functional, including a lower front spoiler and the big, downforce-generating rear wing.

Volkswagen Sport Coupe Concept GTE. The German maker’s Geneva concept’s “visually sharpened” design language moves beyond the simple, unadorned styling long defining the VW brand. This wide and well-planted show car will strongly influence a top-end production model, though observers debate whether that will be a replacement for the coupe-like CC sedan or even a new flagship. The intriguing plug-in all-wheel-drive system will also fill a niche in VW’s powertrain family.