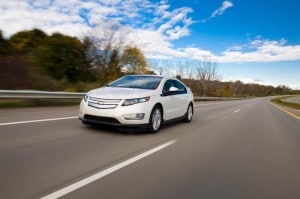 The Chevy Volt is one reason why automakers are tracking to meet long-term greenhouse gas and fuel economy mandates.

Automakers point to the looming 54.5 mpg fuel economy mandate as one of the primary reason that they’re continuing to pursue alternative fuel vehicles despite the low gas prices currently enjoyed in the U.S.

That dedication is paying off, according to an Environmental Protection Agency study, which shows 2013 vehicles are reducing greenhouse gases and improving mileage on a pace to get them to the tough 2025 standard.

According to EPA’s most recent Carbon Dioxide Emissions and Fuel Economy Trends Report, model year 2013 vehicles achieved an all-time record average of 24.1 miles per gallon (mpg) – a 0.5 mpg increase over the previous year and an increase of nearly 5 mpg since 2004.

Overall industry compliance in model year 2013 was 12 grams/mile – or 1.4 miles per gallon – better than required by the 2013 standard, the agency said. It was second consecutive model year that makers beat the standards: 99% of all vehicles sold in the U.S. in 2012 and 2013 met the current standard.

“Automakers are racing to meet our goals,” said EPA Administrator Gina McCarthy. “The American auto industry has never been stronger, we’re creating jobs here in the U.S., selling cleaner cars here and overseas, and consumers are really benefiting from the innovations spurred by these standards.”

Average carbon dioxide emissions from cars and light trucks are also at a record low, the agency noted. Fuel economy has increased in eight of the last nine years. There are more than three times as many 30 mpg vehicles than just five years ago, and fuel economy for SUVs has been increasing faster than for any other vehicle types.

The 2025 standards are expected to save 12 billion barrels of oil, and cut 6 billion metric tons of greenhouse gases and save consumers who purchase a new MY 2025 vehicle more than $8,000 in fuel costs over that vehicle’s lifetime.