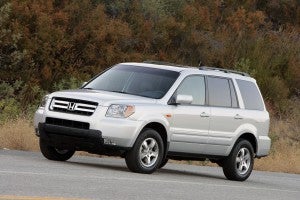 Honda continues getting ahead of the Takata airbag recall as it announced recently it’s expanding its national safety campaign by more than 100,000 vehicles. The move comes shortly after the Japanese maker launched an advertising campaign aimed at raising awareness among owners of these vehicles.

The automaker used the faulty Takata airbags in millions of its vehicles during the course of a decade. The airbags in question, which can explode with such force during operation they eject shrapnel into the cabin, have caused the recall of approximately 20 million vehicles globally. With these additional vehicles added, Honda is recalling about 5.5 million vehicles in the U.S.

“Honda is committed to identifying and repairing every Honda and Acura vehicle affected by this issue,” the automaker said.

The company identified the 2008 Pilot and additional 2001 Accord and 2004 Civic vehicles as being affected by the national Safety Improvement Campaign through a process of confirming, on a vehicle by vehicle basis, which 2001 model year and later Honda and Acura vehicles were originally equipped with affected Takata airbag inflators. Honda recently identified these additional vehicles and quickly notified the NHTSA of its intention to add them to the Safety Improvement Campaign.

(Click Here for details about how dealers take the sting out of recalls.)

Below is the list of affected Honda models from both actions:

The suspect Takata airbags were used by 10 automakers, though Honda was the supplier’s largest customer. Collectively, the problem has become one of the largest, in terms of total vehicles involved, in automotive history.

Last year, the National Highway Traffic Safety Administration issued an unusual order covering millions of vehicles used in areas of high humidity, such as the Gulf Coast, where the bags were considered more likely to malfunction. But subsequent research, and additional fatalities, led NHTSA to call for the recall to be expanded nationwide. Takata has so far refused to do so, insisting the demand isn’t backed up by sufficient data.

(To see why you should expect auto recall numbers to remain high in 2015, Click Here.)

A consortium of carmakers has hired an outside firm, Orbital ATK, to conduct further tests on the Takata airbags. It is unclear if other manufacturers will follow Honda’s lead, but the industry, as a whole, has been coming under pressure to try to boost the rate of recall repairs. According to vehicle tracking service CarFax, there are 10s of millions of vehicles currently on the road with one or more unrepaired defect covered by a safety recall.