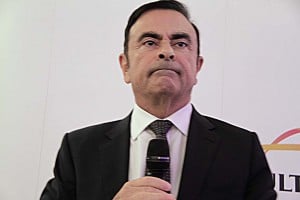 Nissan-Renault's Carlos Ghosn said he expects his company to be the third-largest automaker in the world by 2018: supplanting GM.

No one ever accused Carlos Ghosn of lacking ambition. Ever since signing up as CEO of Nissan, and then adding its alliance partner Renault to his responsibilities, the Brazilian-born executive has been driving relentlessly to boost sales, share and profits.

And in a series of appearances at this year’s Geneva Motor Show, Ghosn laid out his most ambitious target yet. Currently fourth in the global market, he proclaimed the Renault-Nissan Alliance will become the world’s third-largest automotive group by 2018. That should have General Motors looking anxiously over its corporate shoulder, even as Toyota and Volkswagen AG fight it out for the top sales spot.

At a roundtable appearance late during the first day of Geneva media previews, Ghosn admitted there are plenty of hurdles for both the auto industry and for Renault-Nissan itself. The European recovery has begun, albeit slowly, in part due to the drag of the slumping Russian market. But even there, Ghosn sees an upside, the “opportunity to gain marketshare” because of the Alliance’s strong manufacturing base in the heart of the former Soviet Union.

Europe, on the whole, has been suffering from its worst downturn since World War II. The turnaround that appears to begin late last year is likely to be followed “by slow growth,” forecast Ghosn, “for a long time, two to three percent a year.” 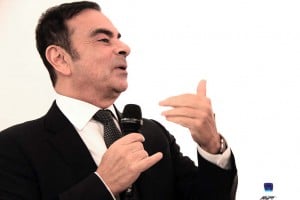 Carlos Ghosn told the media in Geneva today that he doesn't fear Apple or any other company moving into the autonomous vehicle space.

Technology has become a major factor in today’s automotive industry, as was readily apparent at this year’s Geneva Motor Show. Volkswagen fired a shot over competitors’ bows by declaring itself the “innovation” leader, investing more than 11 billion Euros a year in R&D. Ghosn clearly doesn’t intend to cede Nissan’s position as a leader in technologies, such as battery power and autonomous driving, however.

He noted that the Alliance plans to roll out a series of semi-autonomous technologies during the next several years, including one that would take over for a driver in city environments. A completely autonomous vehicle, he said, will come from Renault and Nissan early in the next decade. But Ghosn split hairs, noting that while autonomous vehicles with humans ready to take control will be available in the “short-term,” it will be much more “long-term” before fully driverless cars are ready for mass market use.

The race for self-driving dominance has been heating up. Not only are traditional automakers in the hunt, but also are some potentially disruptive outsiders, notably including Google which is now beginning a fleet test of autonomous “Google Cars.” Meanwhile, there is widespread belief that consumer electronics giant Apple is also working on self-driving vehicle technology.

“It is refreshing to see even tech companies joining in,” said Ghosn.

Earlier in the day, at his own Geneva news conference, Fiat Chrysler CEO Sergio Marchionne said he welcomed the arrival of such “disruptive interlopers,” though he also admitted being “concerned” about the possibility of a challenge from a company as rich as Apple. 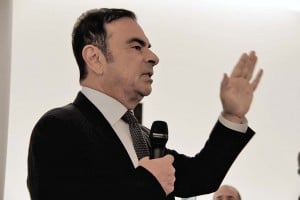 For his part, however, Ghosn said, “I absolutely am not fearful or hostile. I think everyone who joins is an ally” who could make autonomous driving a reality.

As for battery cars, Nissan on Tuesday announced improvements in lithium-ion batteries will soon help it increase the range of its Leaf to around 150 miles, or roughly 50% more than the current charge capacity. Other Nissan officials have said the goal is to get that up to 200 miles before decade’s end.

(Click Here for details about VW’s plans to be the auto industry’s technological leader.)

Asked whether Nissan is now making money on its battery program, Ghosn hesitated, cautioning the answer depended on how you account for the hefty initial R&D costs. However, he stressed, that on an ongoing basis, “Are we on course where we now cover the direct costs of (vehicles like the Leaf? Yes.”

Under Ghosn, Renault and Nissan have been putting an emphasis on battery power, even as some key Asian competitors, notably Toyota, Honda and Hyundai, have been focusing more resources on hydrogen power.

(Would you buy an Apple car? Click Here for the report.)

“The chance of seeing many fuel-cell vehicles is very remote until you solve (some basic) problems,” the Brazilian-born Ghosn cautioned. That includes the lack of a hydrogen production and distribution network.

As a result, he argued, any real growth in the hydrogen car market, “is more than five years down the road.”