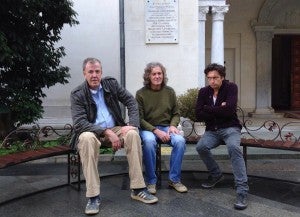 The BBC fired Top Gear Host Jeremy Clarkson, left, after he punched a producer. The future of hosts James May and Richard Hammond, right, will return.

The world’s most famous, or infamous may be more appropriate now, automotive journalist, Jeremy Clarkson, the host of the BBC’s influential Top Gear has been given the boot.

Tony Hall, the BBC Director-General, said in a statement,  “It is with great regret that I have told Jeremy Clarkson today that the BBC will not be renewing his contract. It is not a decision I have taken lightly. I have done so only after a very careful consideration of the facts.

“I know how popular the program is and I also know that this decision will divide opinion,” he added. “The main facts are not disputed by those involved.

The investigation found that Jeremy Clarkson reported to BBC management that he had been involved in a physical and verbal incident with Oisin Tymon, the producer of Top Gear, at the Simonstone Hall Hotel, North Yorkshire whilst working on location.

But interviews with witnesses showed that Clarkson was clearly the aggressor, MacQuarrie found.

The incident was just the latest in a long string of incidents involving Clarkson, who’s known for being brash and occasionally outlandish. He had been put on notice last year after he was heard allegedly using the N-word in a video outtake: a charge he refuted.

Recently, Clarkson cursed out BBC’s management at a charity function while suggesting the BBC ought to ignore the “fracas” and renew his contract.

Hall emphasized in his release that the company wouldn’t knuckle under to public pressure to bring Clarkson back nor was any one person bigger than the company.

(Click Here for details about the redesigned Malibu adding a 45 mpg hybrid.)

“There cannot be one rule for one and one rule for another dictated by either rank, or public relations and commercial considerations,” he said.

He lauded Oisin for his professionalism and integrity during the process, adding he would remain with the BBC. Hall took great pains to note Clarkson’s accomplishments during his nearly two-decade career with the BBC and to state the obvious: Clarkson will find another gig.

(To see the 10 most annoying car features, Click Here.)

“This decision should in no way detract from the extraordinary contribution that Jeremy Clarkson has made to the BBC. I have always personally been a great fan of his work and Top Gear,” he said. “Jeremy is a huge talent. He may be leaving the BBC but I am sure he will continue to entertain, challenge and amuse audiences for many years to come.”

The BBC must now look to renew Top Gear for 2016, which won’t be a simple as it sounds. All three show hosts need to have their contracts renewed. During his suspension, his Top Gear partners, James May and Richard Hammond, have declined to tape additional episodes, which suggests they may not be inclined to return to the show.

The rumor mill has been churning for some time about who might replace Clarkson, but the potential candidates have all said essentially they weren’t interested in replacing Clarkson. Top Gear is the most-watched television show in the world and has spawned versions in several other countries, including the U.S. and Australia.

There is some scuttlebutt that Clarkson as well as May and Hammond may bring their act to the U.S. for a show that could be put on by a network or some other broadcast company like Netflix.