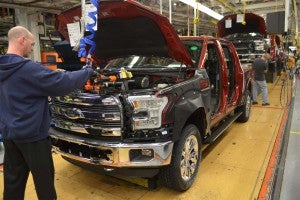 The Ford F-150 assembly should continue humming along in 2015, according to analysts.

With the big New York Auto Show set to open this week, carmakers have every reason to be optimistic about their prospects for the month ahead based on preliminary data.

The economy remains on track to grow 3% this year, up from 2.4% in 2014, according to a new analysis by IHS Global Insight. At the same time, Consumer Sentiments as measured by the University of Michigan monthly survey of consumers.

Motor vehicle sales are expected to have picked back up to a 17-million annualized pace in March as the weather improved, IHS noted.

While consumer spending weakened in first quarter 2015, it is still likely to post a gain of 3.3% for the year as a whole, according to U-M economist Richard Curtin, who directs the surveys.

“The harsh winter weather and the small rebound in gas prices caused some slippage in consumer confidence since the start of the year,” Curtin said. “Nonetheless, expanding job opportunities as well as more favorable wage gains have meant that consumer spending will strongly rebound during the balance of the year.

While the current finances of consumers were a little less positive in March than in January and February, they were still judged more favorably than any time in the prior eight years. While the largest income gains were expected by those under age 45 and by households with incomes in the top third, the largest improvements during the past year were actually among middle-income households and those aged 45 to 64.

The broadening of positive income expectations is certainly a good indication for future spending, Curtin said.

(To see more about the recent crack down on crooked auto dealers, Click Here.)

By the numbers, the U-M Index was 93 in the March 2015 survey, just below February’s 95.4, but was significantly above last March’s 80. The Current Economic Conditions Index retreated to 105 in March from 106.9 one month ago, and was well above last year’s 95.7. The Expectations Index fell to 85.3 in March from 88 in February, but posted a substantial gain from last March’s 70.

IHS said the near-term outlook will remain characterized by a sharp drop in the oil rig count, an inventory correction, a recovery from February’s unseasonably harsh winter weather, and perhaps increased trade volumes as the West Coast dockworkers labor situation returns to normal.