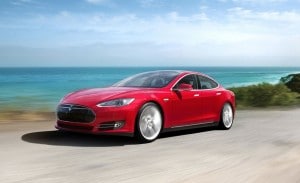 For the second year in a row, the Tesla Model S captured Consumer Reports best overall vehicle award by scoring 99 out of 100 points in the magazine’s annual review of vehicles.

Tesla’s top-of-the-line electric vehicle, which was named the best model for 2014 too, couldn’t be overtaken by any of the new entries.

“For all of the impressive new vehicles released in 2014, none was able to eclipse the innovation, magnificence and sheer technological arrogance of the Tesla,” according to the magazine. “That’s why it’s our best overall pick for the second consecutive year.”

(Click Here for the complete list of the best brands and models in the Consumer Reports study.)

The Palo Alto, California-based EV maker took the top spot last year with the same score. However, since it’s testing took place, it made several updates to the vehicle, including adding more power and several safety updates such as collision avoidance technology.

Those updates, which were made without having to call any vehicles in for service, made all the difference this time around for Consumer Reports.

“Through the course of their life cycles, cars become obsolete quickly as newer models appear with updated gizmos,” the magazine noted. “But with Tesla’s over-the-air software updates, a Model S that came off the line in 2013 has many of the same new features as one built today.

“Despite the Tesla’s teething problems at launch, our subscriber reports showed average reliability. The Model S is a technological tour de force, a high-performance electric vehicle with usable real-world range, wrapped in a luxury package.”

(Tesla plunges deeper into the red. For more, Click Here.)

However, if you don’t have the $70,000 to $100,000 to buy a new Tesla, don’t panic. Consumer Reports provides a variety of categories for potential buyers to use when selecting a new vehicle or you could simply whittle it down to a brand.

Subaru is the only brand that took three spots in the rankings – compact car, midsize car and small SUV. , it helped to lead the company to the top of the brand rankings. An American brand did make the top 10 list, Buick, but it’s still the Japanese and European brands taking the overall leads Lexus, Mazda, Toyota, Audi and Subaru taking the top five brand spots.

(Click Here for details about GM and the Tesla-fighting Chevrolet Bolt it plans to build.)

Porsche took the sixth spot, with the aforementioned Buick, Honda, Kia and BMW rounding out the top 10 brands. Names not in the top 10 include Mercedes-Benz, Acura and Infiniti. All dropped due to unreliable new models or poor road test scores. Mercedes dropped to 21st, and Acura to 11 due to a poor test for the new RLX sedan, according to the magazine.

While American brands improved, they’re still lagging their Japanese and European competitors. Four of the bottom six finishers came from Detroit: Chrysler finished 23rd, followed by Ford, Dodge, Mini, Jeep and Fiat. Once again, Ford was hampered by its infotainment systems, but did show some improvement with fewer reliability problems.