Sentra, Maxima may be next to get the high-performance badge. 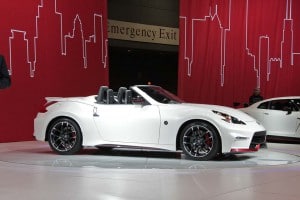 Nissan's 370Z Roadster NISMO Concept is the latest to display the maker's high-horsepower badge, but not likely the last.

“Welcome to NISMO World,” proclaimed Nissan’s Darren Cox, as he stood on stage at the Chicago Auto Show surrounded by new models from the Japanese maker’s high-performance brand.

On one side sat the low and menacing GT-R LM P1 race car Nissan plans to campaign on the Le Mans endurance circuit this year. Off Cox’s other shoulder, the 370Z NISMO Roadster Concept that is all but certain to join the performance unit’s growing line-up in the next year or two.

That would bring to five the number of models sold by Nissan’s ultimate performance unit, but the party is likely to get even bigger in the near future, NISMO’s global marketing manager told TheDetroitBureau.com in an exclusive interview.

“Anything is possible,” said Cox. “We’re looking at the entire range” of Nissan products to see which can be given the NISMO treatment.

The Sentra is the model currently getting the most serious consideration, the exec revealed. “Sentra has sports heritage,” Cox said, referring to past racing efforts.

But he also hinted that the next-generation Maxima could also wind up with a NISMO edition. The 2016 Maxima made a cameo appearance at the end of the unusual 90-second commercial Nissan ran during the Super Bowl earlier this month. It will have a formal introduction at the upcoming New York Auto Show, Nissan officials confirmed this week.

NISMO is “the ultimate expression of the brand,” Nissan product planning chief Pierre Loing said in Chicago, but he also cautioned that “the NISMO name is not to be taken lightly.”

Cox agreed, saying that the automaker doesn’t intend to simply slap the badge on any available car and add a few appearance features – something some of its competitors have been doing on their so-called “sporty models.”

“We have to have credibility with these cars,” stressed Cox. “We can’t just do a body kit and call it a NISMO.”

In the case of the 370Z NISMO Roadster Concept, the ragtop does feature some significant exterior work upgrades, including functional and fully integrated aerodynamic body pieces inspired by the NISMO GT-R. The Concept also gets a unique carbon fiber rear spoiler and wide, super-light alloy 19-inch wheels with Y-rated Bridgestone tires.

But the heart of the package is an updated version of the stock 370Z Roadster’s 3.7-liter V-6. At 350 horsepower, it’s gotten an 18 hp boost over the stock convertible.

Nissan officials say they will be watching closer for public reaction to the 370Z NISMO Roadster Concept. But they’re already convinced there’ll be enough demand to justify putting it into production.

Indeed, if it does show up on dealer lots, expect to see it in short supply. The NISMO GT-R version has been sold out for some time. Meanwhile, the NISMO models account for about 15% of overall Juke sales and 20% of 370Z Coupe sales.

A strong showing by the new GT-R LM P1 model would only enhance the demand for NISMO models, Nissan is betting.

The race car will mount a challenge in the toughest class on the endurance car circuit. And it will do so by taking some big risks. The unusual design of the GT-R LM P1 was dictated by Nissan’s decision to go with a front-wheel-drive layout, a first for the series.

While the maker isn’t revealing hard numbers, it’s believed to make more than 1,000 horsepower, at peak, thanks to the use of a KERS hybrid system that recaptures energy normally lost during braking and coasting.

(Click Here for details about Nissan’s return to Le Mans.)

The Le Mans program is a complement to the Formula 1 program sponsored by Nissan’s upscale brand, Infiniti. And the maker insists that it is making a big push into motorsports for more than just the marketing value.

“There is a crossover between our racing cars and our production cars,” said Cox.

While you’re not likely to see a KERS kinetic energy hybrid system on a production model anytime soon, the NISMO marketing chief told TheDetroitBureau.com that the performance division is looking at its “evolving” options.

And that could include an electrified powertrain. Cox pointed to recent news reports that have suggested the next-gen GT-R will go with a hybrid powertrain – though he would not confirm whether the reports are accurate.

But with conflicting demands for better performance and increased fuel economy, automakers like Nissan may have no choice but to adopt game-changing technologies.