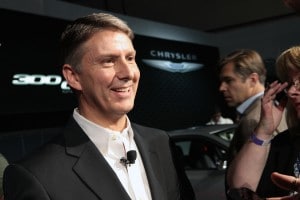 A key FCA US executive confirmed the new family of Chrysler minivans will include a plug-in hybrid version.

Last month, Fiat Chrysler Automobile Chief Executive Officer Sergio Marchionne said he hoped to have the new minivan ready for an unveiling at the next North American International Auto Show in January 2016.

FCA’s new five-year plan calls for building Chrysler into a brand that can “face off” directly in six key segments with Chevrolet, Ford, Toyota, Honda and Nissan. It will require new products, such as the plug-in electric minivan, according to Gardner, who declined to discuss other future products except to note the plan included a compact vehicle.

Gardner added that while growth of the Chrysler brand has lagged behind the sales growth of Jeep and Ram, momentum is building. For example, the Chrysler 200 has been a major success. In January, the 200, which was named the “Family Car of the Year” by the Midwest Automotive Media Association, finished fifth in the intensely competitive midsize passenger car segment, trailing only well-established nameplates, such as Toyota Camry, Honda Accord, Ford Fusion and Nissan Altima.

“We beat Malibu and we even beat out the Hyundai Sonata,” which has only been on the market for less than six months, he noted.

Overall Chrysler brand sales were up about 3% last year and with the industry trending towards sales of 16.8 million units to 17 million units this year, they are poised to grow again during 2015.

The success of the 200 has given FCA confidence that the Chrysler brand can thrive in the middle of the market by offering uniquely American style as well as the latest and best technology, Gardner noted. “Everyone else in the segment is a little dull. The 200 is not supposed to be a “me-too” vehicle,” he added.

The new minivan is another vehicle that can change the perception of Chrysler through the offering of sophisticated technology.

FCA US started the renovation of the Windsor assembly plant just after Christmas, using a 600-ton crane to start installing 200 pieces of structural steel to create a new conveyor enclosure on the plant’s roof.

(Click Here for details about FCA’s dip in profits.)

Measuring just over 20 feet tall, the conveyor enclosure will house the plant’s new skillet line, a global standard for Fiat Chrysler Automobiles facilities. The skillet moves the vehicle along the line, adjusting its height to the desired level for workers, improving vehicle quality with a better line of sight. The skillet also provides optimal ergonomic positioning, which allows workers to function in the Golden Zone, a 60-degree window in front of the operator that is ideal to present parts.

The conveyor enclosure and skillet line are among many improvements planned for the Windsor plant in preparation for production of a future model. Additional projects will be completed during 14 weeks of downtime beginning in February.