Audi Lights Up the Road With New R8 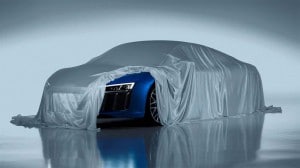 Audi’s updated R8 sports car is about to hit the bright lights – quite literally – when it makes its debut at the upcoming Geneva Motor Show.

The German luxury maker is offering a first, tantalizing teaser image of the 2016 R8, and while it’s difficult to see just how much the mid-engine sports car changes overall, there’s big news in that headlight peeking out from under the covers. Among the many new technologies Audi promises to introduce, the R8 will be getting optional laser high-beams.

“The special appeal of laser lighting,” explains Audi, “is that it uses high‑intensity laser diodes, which generate a lot of light energy from a very small component. Compared to LED high‑beam headlights, laser high‑beams attain nearly twice the lighting range.”

(For plans to build the new GT ultracar in Canada. Click Here for more.)

Audi first used laser lighting on its R18 e-trong Quattro race car during the 24 Hours of Le Mans, and then on a limited edition R8 LMX model. Now it becomes available to all R8 buyers.

The technology is just beginning to roll out in the auto industry. It was first featured by BMW on the i8 plug-in hybrid sports car. As with other recent high-tech breakthroughs, laser lighting is expected to start out at the upper end of the automotive spectrum and slowly go more mainstream as pricing falls.

“Each headlight contains one laser module that operates with four high‑intensity laser diodes,” adds the Audi release. “This module bundles the four intense blue‑light laser beams. Then a phosphor converter transforms the blue light into pure white light. An identifying characteristic of the laser headlights is their blue light signature.”

That is reminiscent of early versions of HID, or High-Intensity Discharge, lights. The blue tint didn’t make all users happy, nor did other motorists always like the way the light looked on the road. Lighting manufacturers have since found ways to make HID headlamps produce a more natural color, and it remains to be seen if that happens with laser lights, as well.

The bad news for now is that the long-range high-beam system will be available only on Euro-spec versions of the new R8, says Audi. The National Highway Traffic Safety Administration has not approved laser lights for use in the U.S., in part due to concerns about the impact it could have on oncoming traffic.

All versions of the 2016 Audi R8 will get standard LED headlight, however, Audi says.

While the teaser image of the Audi R8 doesn’t reveal much else, recent spy shots of the 2016 sports car suggest that the design will be largely evolutionary, clearly maintaining the mid-engine layout that has helped win so many dedicated fans.

But under the skin, the new version is expected to share the same composite chassis introduced for 2015 on the more expensive 2015 Lamborghini Huracan. That should make the 2016 Audi R8 even stiffer.

As for powertrain options, it is expected to share a slightly lower power version of the Huracan’s V-10 engine, and will likely also maintain a version of the current R8’s V-8 package.