Chrysler has some big changes in its minivan plans, with a new Town & Country coming for 2017. Photos by Jim Dunne: Autospy.

Chrysler is hard at work preparing an all-new version of the Town & Country van, set for introduction as a 2017 model.

The much-anticipated debut will cap some major changes at Chrysler. At one point, the maker offered a variety of different – though largely badge-engineered – minivans, including not only the T&C but the Dodge Caravan and Plymouth Voyager, as well. From 2017, only the one model will remain, the maker developing a very different sort of “people mover” to replace the Dodge offering.

The big challenge for FCA US LLC – the new name for the merged Fiat-Chrysler – will be to maintain demand for even its one remaining classic minivan. Once controlling more than two-thirds of the market, it has come under withering assault from a handful of foreign competitors, notably the Honda Odyssey and Toyota Sienna. At the same time, the minivan market itself has shrunk drastically since its mid-1990s peak.

There’s been plenty of speculation about where Chrysler would go with the 2017 T&C remake, and it is said to be borrowing at least some of the cues seen in the form of the distinctive 700C concept van that debuted during the 2012 North American International Auto Show. 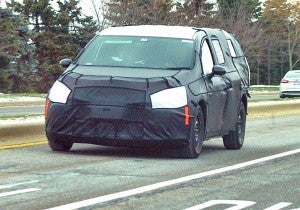 Chrysler offered a hint of what could come with its 700C concept van unveiled in 2012.

For his part, design FCA US design director Ralph Gilles recently offered a cryptic comment, suggesting, “We’re trying to push the envelope and not disturb what’s good about the minivan.”

(Jeep sales set to top 1 million for the first time. Click Here for the story.)

It’s hard to tell how much of the 700C will re-emerge in the production van based on these heavily camouflaged shots of early Chrysler Town & Country prototypes undergoing testing. But while they show little in the way of overall styling, some details are evident. The shape of the A post is a big tipoff. (You can’t very well change the shape of those boxy van bodies). With a new, curved profile, the A-post portends all-new body panels including front doors and roof, as well as windshield.

Check out the position of the side view mirror — set lower in the door instead of being mounted on the sill – something that could, among other things, reduce wind noise.  The driver’s window is affected by the repositioning with a curved — not angular — front frame, another hint to new door styling that may carry over from the 700C concept.

Up front, the face of the new van, while hidden, does offer a couple of clues to the changes coming. For one, the grille has a honeycomb texture intake (one echoing the new look of an upcoming version of the Chrysler 300). Headlights have a squished-down shape, a departure from the current rectangular frames.

Taken together, the details betray an all-new styling makeover for the 2017 Town & Country. 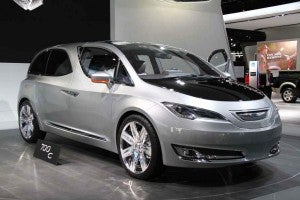 Chrysler tested the waters for a more radical minivan alternative with the 700C concept.

What else can we expect? Chrysler – er, FCA US – isn’t saying much, but expectations are that the current 3.6-liter V-6 engine will carry over, possibly paired now with the maker’s new 9-speed automatic gearbox. An 8-speed is the alternative being discussed.

Whether the T&C will again offer all-wheel-drive, meanwhile, remains to be seen. Chrysler dropped AWD a generation back, as it couldn’t find a way to power the rear wheels because of the deep floor trough created by its Stow ‘n’ Go seating system. Perhaps it has found a fix.

The all-new version of the Chrysler Town & Country was originally expected to wear a 2016 badge. It now appears that it has been pushed back to 2017, though it could hit market little more than a year from now.

As for the Dodge Caravan, there is some talk about extending the run of the old model, at least briefly, if there’s enough demand from the fleets that currently consumer two-thirds of its volume. But it is eventually expected to shift to something more crossover-like. All but certainly, the familiar and defining minivan doors will go away. Beyond that, well, we’ll have to wait to see what pics our spies can come up with.