Next Acura RDX Blowing into Chicago 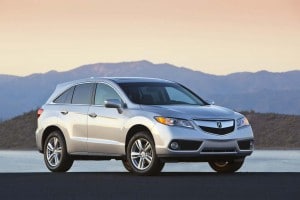 The 2015 Acura RDX gets a makeover for 2016 that will make its debut at the Chicago Auto Show next month.

Acura plans to blow into the Windy City next month with a redesigned version of its compact RDX sport-utility vehicle.

The RDX is one of the Japanese luxury brand’s most important products. Acura has long struggled to gain traction in the passenger car market, but it has routinely been one of the leaders in the upscale crossover segment with the RDX and larger MDX.

The luxury arm of Honda isn’t offering many details, but referring to the strong fuel economy numbers for its V-6 version, an Acura release suggests, “the 2016 RDX takes the position a step further, adding important improvements to performance, dynamics, comfort and NVH,” or noise, vibration and harshness.

Along with the other improvements, the maker promises some “new luxury and safety features.” The market has moved on quite a bit since the launch of the current Acura RDX, so the replacement is likely to get such additions as the brand’s latest infotainment system, blind spot monitoring and possibly both forward collision warning, active cruise control and other high-tech touches.

Based on the Acura news release, it seems highly likely the RDX will continue to offer its 3.5-liter V-6, currently rated at 273 horsepower and 251 pound-feet of torque, with a six-speed automatic transmission and either front- or all-wheel drive. Whether a smaller, more fuel-efficient four might be added to the line remains to be seen.

The current RDX was introduced at the 2012 Detroit Auto Show, launching later that year as a 2013 model. It has had only modest updates since.

Sharing the same platform as the outgoing crossover, basic dimensions are likely to change only slightly, at most. Visually, the RDX is expected to reflect what’s been done with other recent model updates, such as the MDX. That could include a smaller version of the brand’s controversial “beak” grille.

(Click Here for details about the passing of PR vet Tom Kowaleski.)

Only the big MDX outsells the RDX within the Acura line-up. The maker moved 44,865 of the compact crossovers last year.

Acura will unveil the 2016 RDX refresh on Feb. 12 at the Chicago Auto Show.