The lines blur between tech and auto worlds.

Ford expects to employ 125 at its new Research and Innovation Center in Palo Alto.

As modern cars become increasingly dependent on digital technology, whether for safety, emissions or infotainment systems, the lines have been blurring between the rust belt and Silicon Valley. The latest example is a dun-colored office building in Palo Alto not far from such high-tech giants as Apple and Google. But this one will soon be staffed by 125 employees reporting to Ford Motor Co.

Ford was an early pioneer in the world of telematics with its Sync infotainment system. But as the maker – like its competitors – has come to learn, the pace of development in the electronics world operates far faster than in the auto industry. So, Ford’s new Research and Innovation Center will act as an outpost, tapping into the talent and technologies that have made Silicon Valley one of the world’s most important high-tech centers.

“The valley here is a marketplace of ideas,” said Ford CEO Mark Fields, who was on hand for this week’s dedication of the Research and Innovation Center. “It’s about being in the right neighborhood because of all the collection of companies. Our folks going to the coffee shops will run into folks from other companies and strike up conversation.”

Ford data suggest that the Sync system has become one of the major drawing cards for new customers, especially young ones who have grown up with laptops, tablets and smartphones. The latest version, dubbed Sync 3, is meant to operate more like a smartphone, and will let a user access an array of apps, whether by voice or by using the car’s touchscreen display.

But the push for more advanced technology is not just about fun and games. Like its competitors, Ford is rushing to develop smarter, safer and cleaner cars. Significantly, some of the most advanced research in autonomous driving is taking place just up the road from the new Palo Alto office, Google considered beginning to field a fleet of self-driving cars of its own design.

(Google looking for partners; has no plans to build cars of its own. Click Here for the latest.)

Ford already has developed some significant ties to Silicon Valley institutions such as Stanford University, which is helping it work on autonomous technology. And the California brand of Carnegie Mellon University has been helping the automaker improve its voice recognition systems.

Ford isn’t abandoning Detroit when it comes to technology research. It will maintain offices both near its suburban Dearborn headquarters, and in Achen, Germany. But being in Silicon Valley will be “crucial” to accessing a wealth of knowledge and talent, according to Fields.

Indeed, the maker was able to lure in a veteran Apple engineer to run the new R&D center, Dragos Maciuca, who also has had experience in the aerospace industry, and in the high-tech center run by BMW.

The German maker has its own Silicon Valley operations, as do Volkswagen, Mercedes-Benz, General Motors, and a virtual Who’s-Who list of major automakers, all eager to be on the cutting edge of digital research. Ford has had a small presence in Northern California since 2012, but it claims itsnew  Innovations Center will be the largest such automotive outpost when fully staffed.

“The collaborations will be a great opportunity for us,” said Raj Nair, Ford’s global product development director. “We’re going to have one of the largest presences of any automotive company out here.” 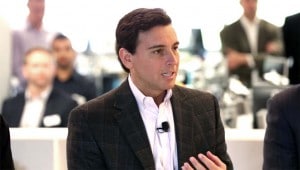 The range of benefits Ford expects from the new center is broad. It’s even working with Nest, the high-tech thermostat maker recently purchased by Google for $3.2 billion. That could lead to the integration of smoke and other detectors into a vehicle, providing owners remote alerts – while also allowing them to pre-set temperatures on a hot or cold day.

Ford’s efforts will tap into data it’s been receiving from 4 million vehicles equipped with two-way data systems. That will not only show how consumers use their vehicles, but also reveal the unexpected problems they experience.

That’s part of a new way of thinking for the automaker, said Fields, noting that, “Beyond being an auto company we’re thinking of ourselves as a mobility company.”

(Toyota breaks ground on new US headquarters in Texas. Click Here for the story.)