Shades of Watergate: What Did GM Know and When Did it Know it? 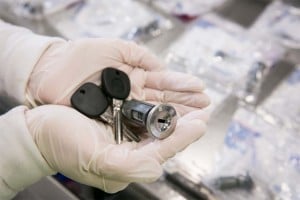 One of the replacement GM ignition switches.

Raising a specter of the old Watergate question – what did the President know and when – internal General Motors documents reveal that the maker ordered 500,000 replacement parts months before alerting federal regulators about a faulty ignition switch now linked to at least 32 deaths.

The e-mails were released today by Texas personal injury attorney Robert Hilliard who is handling some of the many lawsuits filed against GM in the wake of its February announcement of a recall covering 2.6 million vehicles sold in the U.S. They were equipped with ignition switches that could inadvertently shut off a vehicle and disable its airbag system. The administrator overseeing a victims’ compensation fund established by the maker has so far acknowledged the problem led to 32 deaths – a figure that could yet go higher.

“This pulls the curtain back completely and proves GM has not been forthright,” Hilliard said, referring to documents that appear to show that GM knew at least as early as December 18, 2013 that the switches needed to be replaced.

An investigation commissioned by GM, and conducted by former federal prosecutor, Anton Valukas indicated the maker didn’t decide to order a recall until a month later, with the National Highway Traffic Safety Administration being notified in February. GM initially issued a service notice covering about 800,000 vehicles, more than tripling that figure later in February.

GM CEO Mary Barra echoed the timing cited by the Valukas report when she testified before Congress earlier this year.

(Takata’s losses from its airbag recall are mounting rapidly. Click Here for the latest.)

The documents released by Hilliard were written by lower-level GM workers and employees at the automotive supplier Delphi Corp., noted the Associated Press, and were produced between December and February, with some referring to the matter as “urgent.” Others raised the specter of a “safety issue.”

“Per the voicemail I just left you, I am looking for a build and ship plan for a large volume of this part to support an urgent Field Action for our customers,” GM contractor Sarah Missentzis wrote to Delphi in an e-mail dated December 18, 2013. “I will need to secure a total of 500,000 pcs, at this time. I am not sure if you have any stock you can provide prior to the holiday break or not, please let me know so I can make the manual adds to the system to accommodate.”

Federal law has specific guidelines as to when a carmaker must notify NHTSA about potential safety problems. GM has already received the largest fine the agency has ever levied for delaying the ignition switch recall. CEO Barra has acknowledged the company failed to act expediently, firing 14 employees for their role in the debacle. The first indications of a problem now appear to have surfaced a decade before the recall was launched, GM missing numerous red flags in the years to follow.

The AP cites another former federal prosecutor, Wayne State University law professor Peter Henning, as saying federal prosecutors will have “a field day” with the latest revelation. The U.S. Justice Department has launched a probe of the ignition switch debacle and is expected to levy major fines and possibly bring additional criminal charges.

One of the questions raised is whether Barra might have become aware of the ignition switch problem prior to becoming the maker’s new chief executive at the beginning of the year. Her previous role was head of GM’s global product development operations, and Hilliard said it seems difficult to imagine she would not have been alerted to an order seeking the purchase of 500,000 replacement switches.

GM said the company maintains the timeline noted in both the Valukas report and in Barra’s congressional testimony. It also issued a statement acknowledging that the e-mails reflect the  internal problems it is trying to correct, “These emails are further confirmation that our system needed reform, and we have done so. We have reorganized our entire safety investigation and decision process and have more investigators, move issues more quickly and make decisions with better data.”

The automaker last week announced it was sending out gift cards to encourage more owners to get their ignition switches replaced. So far, only about half the vehicles impacted by the defect have been repaired.

(Click Here for more on the gift card campaign.)