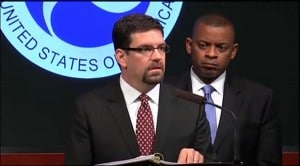 Federal regulators continue to demonstrate their renewed commitment to enforcement by demanding Honda produce more information about its use and knowledge of Takata Corp.’s defective airbags.

The push yesterday by the National Highway Traffic Safety Administration (NHTSA) is the second time this week the agency has pushed Honda “to produce documents and answer questions under oath relevant to our ongoing investigation into defective air bags made by Takata,” according to David Friedman, NHTSA Deputy Administrator.

On Monday, NHTSA told Honda it needed to provide information about its Early Warning Reports to the federal government. The quarterly reports are used by regulators to spot potential problems with vehicles.

The order from NHTSA is basically the same as the one issued to Takata last week. The Japanese supplier produced airbags for 10 different automakers. Takata is scrambling to produce replacement parts and even enlisted the help of its competition after NHTSA officials pressured the company to increase the production rates and ask for help form other suppliers.

The supplier, along with several automakers, is facing at least four lawsuits regarding the improper inflation of the airbags. The airbags, when in vehicles in areas with high humidity, are prone to come loose from their brackets when the igniters discharge sending plastic and metal shrapnel into the vehicle cabin.

The suits contend that the supplier has known for a decade that the inflators were faulty and could cause injury and even death to occupants in the vehicle. The airbags have been linked to four deaths, including two in Honda vehicles. Honda was the source of the information linking the two deaths to the airbags.

However, NHTSA believes that the automaker isn’t being forthcoming with all its information, including the possibility of more deaths. In response to the problem, the agency issued a geographically based recall of 7.8 million vehicles equipped with the airbags. More than 16 million vehicles worldwide have been recalled.

Critics claim the geographically based recall doesn’t go far enough. The movement of vehicles around the country means that they could be anywhere and limiting the recall to regions puts many car owners at risk.

The Obama administration is investigating NHTSA’s handling of Takata. Congress has been pressuring the agency to eliminate the regional recall as well.