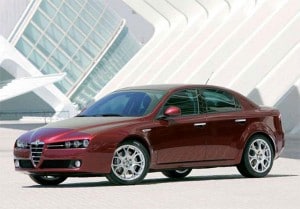 The old Alfa Romeo 159 was sold only in Europe. It's successor will go global, including the U.S.

After months of waiting, American Alfa Romeo fans can finally head to dealers for the maker’s little 4C sports car, the first model the Italian maker has sold in the U.S. in more than two decades. But it will soon have to share showroom space, according to several reports out of Europe.

During a day-long briefing on the company’s plans last May, Fiat Chrysler Automobiles CEO Sergio Marchionne indicated Alfa Romeo will be getting as many as eight new products, and during an appearance at the LA Auto Show this month, Alfa would bring the second of those to the U.S. next June.

While Wester declined to say what that new product would be, it appears the maker will next turn to a midsize sedan replacing the old Alfa 159, according to Luca Ciferri, of Automotive News Europe. The maker apparently will go for a “tweener” strategy, much as Cadillac did with earlier versions of the CTS.

Alfa clearly needs product, especially if it hopes to revive its presence in the U.S. and expand in other parts of the world. The 4C was a good start, Alfa boss Wester told TheDetroitBureau.com in an interview earlier this year, stressing that, “This is the reincarnation of what Alfa stood for in the past.” But the goal is to turn it into a much broader and well-rounded brand, not unlike what parent Fiat Chrysler is aiming to accomplish with sibling Italian luxury brand Maserati.

Alfa will invest about $7 billion to add two compact models, a midsize and a full-size offering, two crossover-utility vehicles and what has been described as a “specialty” line.” There appears to be some question about quite how many models Alfa ultimately intends to offer, some sources indicating six models, others suggesting the line-up eventually will grow to eight different vehicles.

If the latest reports are accurate, what is being called Project 952 internally would result in a successor to the old Alfa Romeo 159. While it was originally intended to come to market as the Alfa Giulia, it appears the vehicle will now get a new name.

The new model’s tweener design would position it somewhere between today’s BMW 3- and 5-Series models. Cadillac took that approach with the first two generations of the CTS, though it eventually moved that line up-market when it added the compact ATS to its fleet.

Alfa apparently believes the new model will be able to target one of the broadest niches within the luxury market, especially in the United States.

The U.S. plays a central role in Alfa’s global revival. Marchionne is planning to boost sales from a mere 74,000 last year to 400,000 by 2018. The North American market would provide 150,000 of those annual sales – a tall order considering the Alfa name was all but forgotten since the maker pulled out of the U.S. in 1996.

There are plenty of skeptics who question Alfa’s viability in the States – and the point to the slow uptake for the Fiat brand, which also came back after a long absence from the market. On the other hand, Maserati has shown a strong resurgence over the last several years as it has expanded and upgraded its product portfolio. Parent FCA is hoping it can pull off the same miracle with Alfa.

(Fiat betting mix of style, utility will build buzz for new 500X. Click Here to check it out.)