How a once-abandoned brand name came back to life. 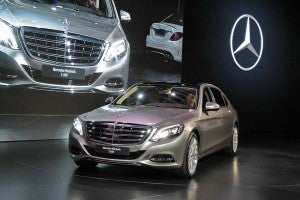 Mercedes-Benz introduced its ultra-exclusive S600 in Los Angeles yesterday with a bit of a surprise: it's the Mercedes-Maybach S600.

It is Los Angeles, so there’s always an opportunity to reinvent yourself. Just ask Mercedes-Benz which used the L.A. Auto Show this week to unexpectedly bring the once-abandoned Maybach brand name back to life.

Named for Wilhelm Maybach, a partner of Daimler AG founder Gottfried Daimler, the Maybach name graced a line of ultra-exclusive automobiles, such as the Maybach M57. But in 2011 slow sales led the company to announce it would kill off the brand.

Mercedes wasn’t about to abandon the market’s most elite buyers, though. It planned a stretched and upgraded version of the elite S-Class, which was originally set to be called the Mercedes-Benz S600 Pullman. But in a surprise move, it has decided to call the new model the Mercedes-Maybach S600.

“There is that customer who wants the next step up, and if we don’t provide it we might lose them,” stressed Steve Cannon, the CEO of Mercedes-Benz USA, in a conversation with TheDetroitBureau.com. 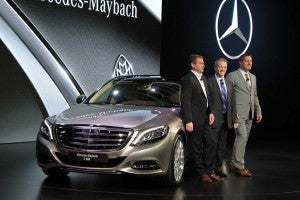 With the Mercedes-Maybach S600 builds a bridge to the most elite customers, according to the automaker.

That concept was a relatively easy one to sell to Daimler AG management. But the question was whether buyers would want something that also bore a more exclusive name.

The German maker tried to answer that in 1997 when it showed off its first Maybach concept vehicle, attempting to position the new brand to go up against more established British marques Rolls-Royce and Bentley. But the new Maybach brand never came close to meeting sales expectations, eventually forcing it to shut down.

Cannon felt Maybach should be given a second chance, arguing his point with Daimler CEO Dieter Zetsche. Eventually, they came up with a compromise that would pair the Mercedes and Maybach names. Mercedes now gets a more exclusive brand-within a brand, will Maybach can draw on the familiar strength of its slightly more mainstream partner. 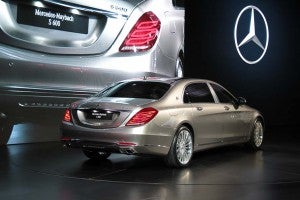 The new Mercedes-Maybach is the first time the Maybach name has been used since 2011.

“It builds a bridge to the most elite customers,” said Cannon, while still “differentiating” them from mainstream Mercedes owners.

There’s now a hammered version of the familiar Mercedes tri-star logo on the hood, but the double-M Maybach logo graces the sheet metal just behind the stretched side windows.

As with the now abandoned Maybach M63, the S600 is one of the longest vehicles on the road, short of a stretch limousine. It measures 17.9 feet, nose-to-tail, or about eight inches longer than a standard S-Class sedan.

(Mercedes opts for order in its alphabet soup nomenclature. For more, Click Here.) 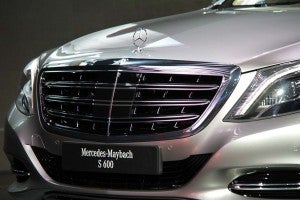 The new Maybach is about eight inches longer than the standard S-Class sedan.

The back seat is designed to serve as a “cocoon” for its passengers, suggested Daimler design chief Gordon Wagener, laying claim to being the single quietest cabin on the road. The interior, meanwhile, is outfitted with some of the finest leathers and woods the brand has ever offered. “Almost every surface is covered with leather” in a diamond-quilt pattern, Wagener noted.

(Click Here for details about this year’s winners of the IVY Award: Ford F-150 and BMW i8.)

The Mercedes-Maybach is meanwhile powered by a massive, twin-turbo 6.0-liter V-12 making 523-horsepower and 612 pound-feet of torque.

“We’ve added a level of refinement worthy of the Maybach name,” said Cannon.

One of the benefits of the new approach, he said, is that Maybach and Mercedes now share a common vehicle platform. That means the upscale brand will have the latest technologies – something it didn’t when it operated as an independent brand.

Whether the world’s most elite buyers will now view Mercedes-Maybach in the same light as Bentley and Rolls remains to be seen, but Daimler is confident it will finally be able to crack into that exclusive club.