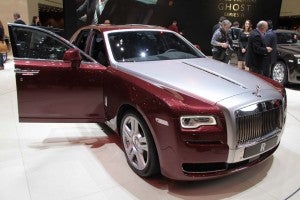 The growth of sales of luxury vehicles in China, like the Rolls-Royce Ghost, is expected to drop to single digits by 2020.

China remains a tantalizing and promising market for western carmakers, particularly for German makers of premium brands such as Audi, Mercedes and BMW. All of them have major stakes there and expect to see double-digit growth rates again in 2015, according to IHS Automotive.

But advisory group’s forecast also contains a cautionary note as it expects the growth rates will “take a significant hit” in the years to come.

“Although the Chinese vehicle market is seeing slowing growth rates, the sheer size of the market, with an estimated 23 million light vehicles forecast to be sold this year, continues to mean it is of immense strategic importance to automakers.”

In addition, within the slower growth rates for the overall Chinese market, the demand luxury and premium segments highlight a growing shift in consumer preferences in China. This is good news for some automakers, such as Ford, which is making a major push in China with its Lincoln brand. The maker is hoping to sell 300,000 units annually by 2020 and sales in China play an integral role in that plan.

However, the premium segment is expected to see a far milder decline than the luxury segment, which is defined to include brands such as Rolls-Royce, according to IHS. This segment is still seeing growth, but the rates of growth in the most expensive segments are expected to drop in the future, IHS predicted. This isn’t great news for Mercedes, which is re-introducing its Maybach with expectations of strong sales in China.

The premium segment in China will continue to see growth but these rates also will fall significantly to single digits. By 2020, growth in the premium segment will drop to a single-digit rate of just 3.6% year over years.

The IHS forecast also noted the situation of the luxury market in China is complicated because the government is keen to reduce conspicuous consumption.

“The wealthy in China are not averse to this,” IHS noted, this means that, although there is a significant drop in growth rates for the luxury and premium segments (as defined by IHS Automotive), there is still a sizeable populace who aspire to own a branded luxury or premium car.

(To see the return of the Shelby GT350 Mustang, Click Here.)

However, despite the social headwinds, the IHS forecast for combined sales in the premium and luxury segments in China is 2.8 million units, up from just 700,000 units sold in 2010. Overall, the market is witnessing a number of limitations to higher growth rates, including restrictions on vehicle sales in major cities across China and lack of major infrastructure projects to fuel the commercial vehicle segment.

“As the overall market growth in China slows, Chinese sales are of growing importance to premium brands, which continue to look for growth within the slowing market,” IHS noted.