Average price is below $4 a gallon in every state. 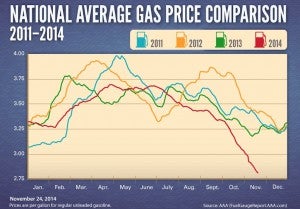 The 41.3 million Americans who are preparing to travel “over the river and through the woods” to grandma’s house will be paying the lowest holiday prices for gas in five years, according to estimate prepared by the AAA Daily Gas Gauge.

“This is 7 cents less than one week ago, one quarter less than one month ago and 46 cents less than one year ago. Today’s price is the least expensive since November 4, 2010 and motorists are on target to pay the lowest averages at the Thanksgiving holiday since 2009, when the national average price was $2.63 per gallon,” AAA said.

Production of petroleum appears to have exceeded current demand and there have been relatively few issues at local refineries, AAA noted. For the third week in a row, the average price for retail gasoline is below $4.00 per gallon in every state and Washington, D.C.

Consumers in South Carolina and Missouri are paying the nation’s lowest average price at the pump, $2.57 per gallon, and 38 states are posting averages below the $3.00 per gallon threshold.

On the other end of the spectrum, states located on the West Coast and northeast continue to lead the nation registering the nation’s highest averages, led by Hawaii at $3.91, Alaska at $3.54, New York at $3.20 and Connecticut at $3.14

The largest discounts are seen in Indiana, Michigan and Ohio, where the average price is down by 13 cents per gallon.

(Click Here for details about the year-end sales event plans for Lexus.)

The latest drop in the price of gasoline comes just ahead of the autumn meeting of the Organization of Petroleum Exporting Countries (OPEC), which has more or less dictated the global price of oil for more than 40 years. Analysts are divided on whether OPEC will agree to broad cuts in production that could at set a solid floor under the price of crude oil and petroleum products for the foreseeable future.

Saudi Arabia, OPEC’s key swing producer, appears to lean towards at least maintaining the current level of production even if prices drop further.

OPEC’s grip has been loosened, at least temporarily, by the surge in oil production in the United States. In addition, energy analysts associated with the environmental movement have noted that conservation measures, such as tighter fuel economy rules, and the increasing use of renewable energy also has helped reduce the demand for petroleum.