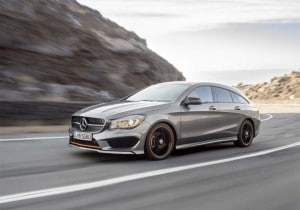 The new Mercedes-Benz CLA Shooting Brake may be what's needed to change the opinions of U.S. drivers about wagons.

Manufacturers have tried going the semantic root: dubbing them shooting brakes, estates, crossovers and cross country. But Americans have shown an uncanny ability to sniff out a station wagon and turn up their noses – which is all the more ironic considering wagons make up one of the hottest segments in Europe.

Could the new Mercedes-Benz CLA Shooting Brake bridge that gap? The more immediate question is whether the German maker will try. It isn’t yet saying whether it will import the “two-box” take on its popular new compact luxury model. But these initial images suggest it might be worth a try.

“Like its big brother, the CLS Shooting Brake, the CLA Shooting Brake is targeted at active customers who are looking outside of the mainstream for a car that impresses with a high utility value,” says Ola Källenius, who oversees Mercedes marketing and sales operations.

The CLA Shooting Brake is the fifth member of the growing family of Mercedes-Benz compact cars – joining the now familiar, coupe-like CLA sedan, the newer GLA crossover, and the A- and B-Class models. Only three of those are currently available in the States, and the B-Class is here only in battery-electric form. 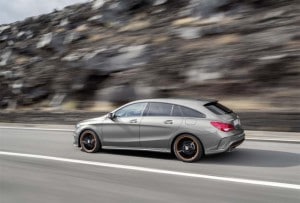 The CLA Shooting Brake is the fifth member of the growing family of Mercedes-Benz compact cars.

Mercedes currently has just one wagon to offer American buyers, the recently redesigned E-Class model. It opted not to bring a wagon version of the coupe-like CLS across the Atlantic.

The CLA Shooting Brake picks up on some of its basic styling cues – albeit in a smaller package – with a very coupe-like roofline that flows into an extended cargo bay, with a liftgate to ease rear access. The design that only means more storage space but added headroom for rear seat passengers compared to the compromises of the CLA sedan.

Under the hood, the CLA will be available with a wide range of powertrains, depending upon market, including two different versions of Mercedes’ 2.1-liter turbodiesel, as well as three variants of the 1.6-liter inline-four gas engine, ranging from 122 to 156 horsepower.

All-wheel-drive is an option, but fuel-saving Stop-Start is a standard feature on the new CLA wagon.

And, as you might expected, there will be a Mercedes-AMG version, the CLA45 AMG Shooting Brake, churning out 360-horsepower from its turbocharged 2.0-liter four-banger. Mercedes says it will hit 60 in around 4.6 seconds, and make an electronically limited 155 mph top speed. 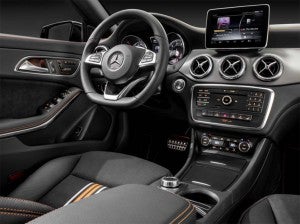 Describing the new CLA Shooting Brake as “beauty in a practical guise,” Mercedes notes the wagon offers nearly 2 inches more headroom than the sedan, and provides easier access to the rear seat. It claims the width of the cargo bay also is best-in-segment.

The tailgate can be electrically operated and offers and optional “easy-pack” system.

As you might expect, Mercedes is loading up the safety features, including a collision warning system with autonomous braking. It also features Attention Assist to flag a motorist who might be getting drowsy.

Features aside, Mercedes would have to decide whether it could win enough potential buyers in the U.S. to justify the cost of homologation – bringing the CLA Shooting Brake into compliance with American emissions and crash laws. That may scuttle any plans to add it to the line-up here.

(To see how Hyundai and Kia will get to 8 million in new vehicle sales this year, Click Here.)

But there are some glimmers of hope for wagon fans. Mercedes opted to retain the two-box E-Class when it was redesigned last year. And Volvo revealed the new V60 Cross Country during the L.A. Auto Show last week.

Could there just be a shift in American attitudes towards the wagon? With the hatchback showing new signs of life, that just might be possible.