BMW i3 Named Green Car of the Year

“Validation” of a breakthrough concept. 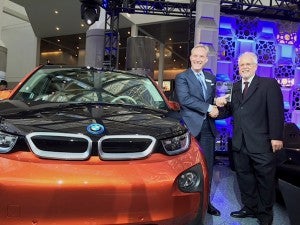 Squaring off with four tough – but environmentally friendly – competitors, the BMW i3 claimed victory as the Green Car of the Year, an award the maker says “validates” the costly development program behind the breakthrough battery-electric vehicle.

The i3 is the smaller and more affordable of two new battery-based vehicles being offered by the German maker’s new brand-within-a-brand, BMW i. It is offered as either a pure battery-electric vehicle, or with an optional range-extending internal combustion engine that automatically fires up when the batteries run down.

The i3 “breaks the mold” not only with its battery drive system but by bringing the use of lightweight carbon fiber down to the mainstream, said Ron Cogan, the publisher of Green Car Journal, which sponsors the award program.

With its tall seating and small footprint, he added, the BMW addresses “the urgent issue of mobility in megacities,” where roads have become increasingly clogged with traffic and the air choked by exhaust fumes.

In fact, the i3 was developed by BMW as part of the ambitious Megacities Program it launched in 2007. The project has also resulted in the recent launch of the more sporty plug-in hybrid BMW i8. Both vehicles make extensive use of carbon fiber, a material that can save substantial weight compared to steel, or even aluminum.

Until recently, that material was too expensive for mainstream automotive use. But as part of a new joint venture, BMW has come up with a new way of producing and molding carbon fiber that brings down costs and increases the pace of production.

All told, BMW has set up four plants for the i3 project, including a CF factory in Washington State that will soon triple its output, expecting to become the world’s largest source of carbon fiber.

(Ram 1500 EcoDiesel drives off with Green Truck of the Year Award. For more, Click Here.)

Accepting the Green Car of the Year award, BMW spokesman Tom Plucinsky called it “vindication of all the work we’ve put into the project since 2007.”

He said he hopes the award also will help boost awareness – and sales – of the BMW i3.

(Click Here for details about the F-150 an i8 being named Innovation Vehicle awards.)

The i3 triumphed amidst a tough set of competitors that included the Audi A3 TDI turbodiesel, the Chevrolet Impala Bi-Fuel gas/CNG sedan, the extremely efficient, gas-powered Honda Fit, and the Volkswagen Golf “family” which includes gas, diesel and pure battery-electric models.

Significantly, there were no hybrid models among the five finalists. That underscored a shift that has occurred since the early years of the Green Car awards. In its first five years, 13 of the 15 finalists were hybrids.

(To see more about the Mini’s new CitySurfer, Click Here.)

Meanwhile, the jury has given the annual trophy to some vehicles not typically on the radar of environmentalists, such as an earlier version of the Audi A3 TDI. Earlier this month, meanwhile, the magazine named the big Chrysler Ram 1500 EcoDiesel its Green Truck of the Year.

The jury consists of a number of environmentalists, regulators, journalists and enthusiasts, including mega-car collector Jay Leno and Jean-Michel Cousteau, grandson of ocean environmentalist Jacques Cousteau.