But there’s bad news for fans of the manual. 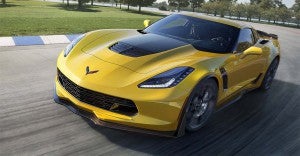 The Corvette Z06 is now part of a pretty exclusive club: the sub 3-second zero-to-60 club.

Chevrolet has just joined one of the auto industry’s most exclusive clubs, the maker announcing that it’s new Corvette Z06 will get you from a dead stop to 60 in a mere 2.95 seconds. Keep an eye out over your shoulder Ferrari and Lamborghini. Who knows what the bowtie brand will accomplish when the eagerly awaited Corvette ZR1 debuts a couple years from now?

Sadly, the announcement from Chevy headquarters could wind up putting another nail in the coffin of the manual transmission. The six-speed stick version of the Z06 came in about a third of a second slower.

The new model is the first spinoff of the C7 Corvette – as it’s known to aficionados – and it takes things up one very significant notch with a supercharged 6.2-liter V-8 under the hood capable of punching out a hefty 650 horsepower.

That’s a mere whisker short of what the last-generation ZR1 managed to make, but the new Z06 sets an all-time record for the 0-to-60 launch, at least if Chevy’s factory numbers can be matched and verified. The figure is for the Z06 equipped with an eight-speed paddle-shift automatic transmission – the version of the car that most buyers are expected to order.

By comparison, the seven-speed manual model all but dawdled off the line, requiring a full 3.2 seconds to hit 60. And it still hadn’t caught up by the quarter-mile mark, the automatic making that run in 10.95 seconds compared to the seven-speed’s 11.2 seconds. But both were clocked at 127 mph as they broke the beam.

The numbers could hasten the demise of the manual transmission, some observers fret. Sticks today account for less than 5% of overall sales in the U.S. new car market, and aren’t doing that much better even in the sports car segment. Indeed, Chevy is one of a fast-shrinking group still offering a manual option. Makers including Ferrari and Maserati have already chosen to go with either automatics or double-clutch gearboxes.

And it’s becoming increasingly difficult to argue against that decision. Porsche’s latest 911 is another classic performance car that now delivers better performance with its PDK double-clutch than the alternative seven-speed manual.

As for the new Z06, which will go on sale early next year, it now stands as the fastest production car ever tested at General Motors’ Milford Proving Grounds, shaving a full second off the best time set by the old Corvette ZR1.

(Click Here for details on what led the strong September auto sales.)

And it fared equally well when asked to scrub off speed, reports GM, going from 60 to 0 in just 99.6 feet, again, a GM best. The new Z06 set a third record with a lateral acceleration of 1.2 Gs, besting the previous Vette’s 1.13 G.

Performance fans will get a chance to check the numbers for themselves if they can come up with the $78,995 price tag.

(To see how the VW XL Sport blends efficiency and emotion, Click Here.)

Some are expected to sit tight, however, waiting for the next ZR1. GM insiders give a wink and a nod, but few other details, when asked about that ultimate Corvette. That’s spurred some wild rumors in recent months, some “sources” suggesting the next model will opt for an entirely new platform from the Stingray and Z06, perhaps even a mid-engine layout that would be more in line with exotic competitors such as Ferrari and Lamborghini.

We’ll apparently have to wait a couple more years to find out – as will the competition.