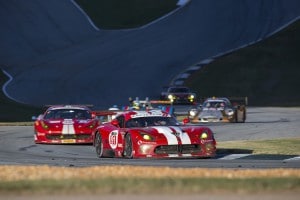 After taking home a championship trophy last weekend, the Chrysler Group has dropped the Viper racing program supported by its Street and Racing Technology (SRT) unit.

“Our company has made a business decision to discontinue the SRT Motorsports Dodge Viper GTS-R racing program,” said Ralph Gilles, senior vice president of Product Design, Chrysler Group LLC, who has headed up the SRT program, which Fiat Chrysler Automobiles had considered making a separate brand at one point.

“We are very proud of the amazing achievements our fantastic teams, drivers and partners have achieved on track the last few seasons,” he said. “We thank them for their hard work, effort and commitment to SRT Motorsports. Its been an honor to be a part of the inaugural IMSA TUDOR United SportsCar Championship season and we wish them every success in the future.”

Chrysler said back in May, however, the SRT name was being re-aligned with the Dodge brand and will be used on a handful of performance vehicles that complement the Dodge brand’s vehicles. The Dodge brand itself has launched a new effort to place a greater emphasis on muscle-car-type performance with the introduction of 707 horsepower Hellcat versions of the Dodge Charger and Dodge Challenger.

The two-car SRT Motorsports team had won the team and driver titles in the inaugural IMSA TUDOR United SportsCar Championship GTLM-class. SRT Motorsports won two of three championships contested in the class and finished second in the GTLM manufacturer championship in just its second full year of the program.

The announcement does not have any effect on the Mopar brand’s drag racing program, the company said.

But Chrysler Chief Executive Officer Sergio Marchionne appears to be something of a racing skeptic.

He unceremoniously dumped Chrysler’s expensive NASCAR program back in 2012 despite pleas from NASCAR series organizers to stick with the series and its millions.

(Click Here for details on why GM’s death toll rose to 24.)

While wearing his Fiat chief executive hat Marchionne also has expressed displeasure with the lavish Formula One racing program sponsored by the legendary Ferrari brand, which is a wholly owned Fiat subsidiary.

(To see why Simon Sproule bolted from Tesla for Aston Martin, Click Here.)

Marchionne’s displeasure with Ferrari’s performance in Formula One undoubtedly contributed to the dismissal of Ferrari Chief Luca Cordero di Montezemolo, who had headed up the Italian exotic carmaker since the early 1990s. Ferrari’s formerly dominant Formula 1 team hasn’t won a title since 2008 and this season and Marchionne has announced that he will serve as Ferrari’s chairman at least temporarily.

Meanwhile, Fiat Chrysler Automobiles continues with the preparations for the initial public offering of stock and listing on the New York Stock Exchange that will take place on Oct. 13.