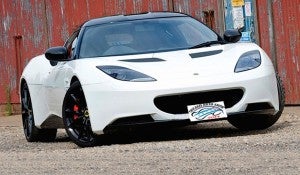 The Lotus Evora will be available for U.S. buyers despite reports to the contrary ... in 2016.

Lotus aficionados in the U.S. can now dry their tears: the English sports car maker will be offering a new version of the Evora after all: in 2016.

Not only is a new model coming, there were be more dealers selling them when it arrives, according to Jean-Marc Gales, chief executive officer of Group Lotus plc.

“I know that this will be welcome news to our thousands of owners and fans in North America, but the reality is that there was never any intention to leave,” he said in a statement.

“The North American market is vitally important for us and we intend to expand our dealer network and grow our sales volumes in the future. In fact in the last twelve months, we have already appointed three new dealerships in the USA and are on course to appoint additional dealers in the next few months.”

The company will sell the remaining stock of its 2014 Evora models as a carryover until the 2016 models arrive. It will continue offering the Lotus Elise S Cup R and the Lotus Exige V6 Cup R are also sold in these markets for race and competition use only.

The concern about whether or not Lotus would remain in the U.S. stemmed from the fact it wasn’t planning to offer a 2015 version of the Evora because it wasn’t prepared to meet the smart airbag standard in the U.S. and Canada. The company’s recent financial issues heightened the speculation that it simply didn’t have the cash in its coffers to pay for the engineering and development needed to meet the rules. Clearly that speculation goes by the wayside now.

“Our customers, both current and future can rest easy, knowing that our car sales, aftersales and support services will continue and indeed improve in the future to support our growth in Canada and the USA,” Gales added.

“We will continue to explore our core vales on how to make a sports car better by making it faster, lighter and maintain the pure driving experience.”

(To see more about TDB’s first impressions of the Colorado and Canyon, Click Here.)

While Gales optimism is admirable it’s cast against the backdrop of recent news the company is considering cutting as much as 25% of its workforce around the world. However, it hasn’t dampened the enthusiasm for Lotus vehicles.

During its first quarter, which begins in April, the company saw sales rise 31% to 505 cars. It was the best quarterly result since 2011. July saw the company turn in its best one-month performance since March 2011 with 226 vehicles sold.