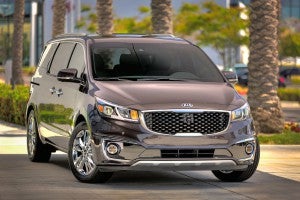 The 2015 Kia Sedona marks the maker's first major overhaul of the vehicle since 2009.

After losing ground, Kia, which is celebrating its 20th anniversary selling cars in the U.S., grabbed some of its mojo back as its sales are growing once again, rising 6.9% so far this year after falling by 3% in 2013.

Coming out of the 2008-2009 recession, Kia was one of the hottest brands in the industry as more and more American buyers found its emphasis on style and value appealing in the aftermath of the financial crisis and steep economic downturn.

It didn’t hurt that Kia was also in the right place at the right time as Toyota was engulfed in a recall scandal and Honda, the other major Japanese brand, faltered with a series of uninspired designs left buyers less than excited.

Kia’s objective now is to keep “moving forward,” according to Michael Sprague, Kia executive vice president of sales and marketing, who noted during a briefing for reporters trying out Kia’s new Sedona “Multi Purpose Vehicle” that Kia’s total sales this year will certainly exceed the 535,000 units it sold last year. 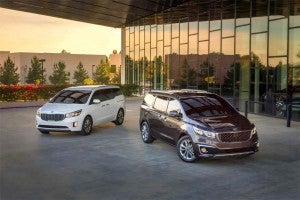 Kia's sales have jumped 6.9% on the strength of a newly redesigned product line-up. The new Sedona should continue the trend.

The introduction of the Kia Cadenza earlier this year demonstrated that Kia could attract new buyers with a car that costs more than $40,000 when fully loaded.

Kia also launched into motor sports five years ago to raise its profile even though it had no racing tradition. This year it claimed manufacturer trophies in two different classes from Pirelli. But the reality is, despite its rising profile and larger marketing budgets, it is still known as a South Korean upstart, Sprague noted.

“We’ve yet to gain the widespread acceptance of Honda and Toyota,” he said. “The truth is we have world-class quality but the perception lags.”

Sprague, however, said Kia has no plans for changing courses. It is slated to roll out several new products during the next year, starting this fall with the new Sedona minivan or as Kia prefers to call Multi Purpose Vehicle and the Soul EV, which is the centerpiece of the company’s clean mobility initiative.

Coming next year are new versions of the Optima and Sorento, which will be unveiled at the upcoming Paris Auto Show. A new version of the Sportage will make its debut in late 2015, Kia officials noted.

“Design is going to play a huge part in our future,” said Sprague.

The first of the new vehicles is the new 2015 Sedona, which was designed to look more like a crossover vehicle with the sliding doors and three rows of seats that have long been part of the minivan functional heritage. 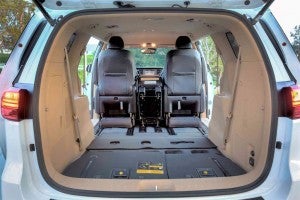 Kia is calling the new Sedona a multipurpose vehicle highlighting its functionality.

Orth Hedrick, Kia’s head of product planning, said that the minivan segment has been in a long decline. But Kia believes the new Sedona, with its new styling inside and out, new powertrain and new technology, will attract new customers.

“The segment hasn’t seen a lot of innovation in recent years, except for maybe the vacuum cleaner,” he said.

“The segment is still fairly large,” added Scott McKee, Kia’s communication director, who noted there are still roughly 550,000 minivans sold annually. “We think it’s a real opportunity for us,” he said.

Hedrick said not only is the new Sedona a “fantastic looking” vehicle, but also Kia upgraded the materials used throughout the interior and will make the latest safety equipment, such as blind-spot monitoring, available.

While the new Soul EV isn’t a purpose-built electric vehicle, the original Soul was designed so it could be converted for use as an electric vehicle. The electric version of the Soul features a new grille, an aerodynamic undercarriage, low-rolling stance tires and an interior package that features plenty of space for a comfortable ride and range per charge of 93 miles.