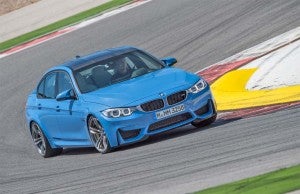 I never believed it would happen. Me, Mr. Mercedes and Audi, in love with a BMW. It’s not that I don’t like Bimmers, I think my aversion to them started when yuppies discovered the brand and started calling the Bimmer a “Beamer.”

The reality of it all is that BMW has and does build cars that are just as happy on the racetrack as they are on the street. And that’s even at the so-called “base” level. Consider the 3 Series, in production since model year 1977. It’s the quintessential performance sedan, coupe or convertible – just take your pick of body styles. It’s benchmarked by nearly every carmaker that wants to build a performance sedan. Add the vaunted “M” trim to the car, and you’ve got yourself a bona fide butt kicker.

For 2015, I’m adding BMW to my “favorite brands” list, journalistic integrity tossed into the wind like a seagull cresting Niagara Falls. I’d already fallen in love with what I think is the best sports sedan on the market, the 640i Gran Coupe, and then BMW added two more to my wish list with the introduction of the 2015 M3 Sedan and M4 Coupe.

Both share the same powertrain, and for the purposes of this review, I’ll focus on the M4 – what used to be known as the M3 Coupe – as I spent more time in it on the track at Road America Raceway and driving it around the scenic back roads of Elkhart Lake, Wisconsin. 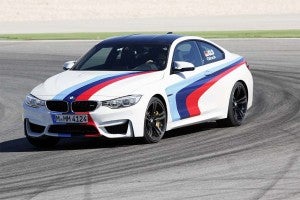 The M4 is based on the 4-Series, which slots perfectly between the aforementioned 3-Series and the luxe 5-Series. In fact, the two-door was long known as the 3 Coupe, but BMW has adopted a new nomenclature that dedicates odd numbers to sedans, even model numbers to coupes and convertibles. (Well, more or less, but we won’t get distracted discussing such oddities as the 4-door 6-Series Grand Coupe.)

The 3- and 4-Series models share the same basic underpinnings, with a few key tweaks that yield a sportier looking coupe than in past years. But to the large degree, they’re twins, especially in M trim.

Where the base 428i makes do with 240 horses via a 2.0-liter twin turbo four, the M4 cranks out 425 horsepower from a 3.0-liter twin turbo six. The twin turbo concept combines two mono-scroll turbochargers with variable valve control (Double-VANOS and Valvetronic) and high-precision direct injection.

The engine is capable of 406 lb-ft of torque over a broad rpm range, a nearly 40% increase over previous models. In the spirit of true M racing, you’ll enjoy a 0-60 mph time of 4.1 seconds, dropping to 3.9 seconds when equipped with BMW’s seven-speed M Double Clutch Transmission, or DCT. The M3 shares the same impressive powerplant. Both platforms have received substantial performance and technical upgrades over previous M models.

To showcase both vehicles’ prodigious performance capabilities, BMW assembled a full squadron of cars at Road America Raceway, a four-mile-plus course with plenty of turns and a straightaway that allows for speeds of 150 mph. 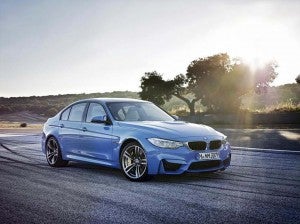 The 2015 M3, the 4th-generation pocket supercar, lived up to its billing during a recent test drive.

After requisite safety instructions, we did four lead/follow laps. Lead/Follow allows non-pros like me to get a sense of what to expect and how to handle corners from seasoned BMW race drivers, who led groups of three around the track. All cars were equipped with two-way communications, so the pros could give commands should they see us out of line. Safety is paramount on the track, and helmets were required. Given my 6’9” frame, I was a bit worried about headroom in the M4 with my helmet on. No worries, I was able to sit up straight, giving me more control on the track. Thanks to a new app integration of the GoPro Hero video camera, we were able to control recording of our track exploits via BMW iDrive and our iPhones.

After one lead/follow lap, the wastegates, so to speak, were opened and we were allowed to go all out with the M Cars – that confidence by the BMW team underscoring both the power and the track-holding capabilities of the new M models.

On the track is where BMW features “M Drive” and “M Dynamic Mode” really shine. Both features adjust performance parameters, giving you more or less control of driving dynamics on the track or during spirited road driving. Advanced lightweighting, exceptional aerodynamics and new methods to isolate the rigid suspension all work in harmony to ensure exceptional racetrack performance.

For example, both cars feature increased use of lightweight materials, such as Carbon Fiber Reinforced Plastic (CFRP), as well as aluminum, for a number of chassis and body components. Both models come equipped with a CFRP roof. When it’s time to slow your rapid advancement, BMW M4 base brakes are up to the task, but if you track your car, the $8,100, six piston carbon fiber brakes are a must. They stop the car with no noticeable fade after repeated romps at high speed. 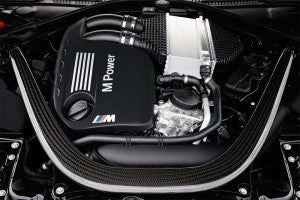 The new M4 puts out 425 horsepower with the 3.0-liter inline six cylinder.

But how many of us actually track our vehicles? Though a surprising number of BMW owners do (no need to purchase an additional race car when all you have to do is slap on some racing tires, don a helmet and your street car is transformed), the reality is most M3s and M4s will do most of their work in Anytown, USA.

(To see why Tesla expected to pick Nevada for gigafactory, Click Here.)

On the roads around Elkhart Lake, the M4 showed its dual personality. First off, the M4 is quiet, with much of the credit going to superior noise reduction without adding much additional weight, and through quiet riding tires thanks to Michelin, which has been outfitting BMW M cars exclusively for a number of years now. And the M4 accelerates as if it is trying to escape a crime scene. It’s fast, it’s efficient and it’s drop-dead gorgeous. What more could you ask for in a sports coupe?

M3 prices begin at $62,000, while M4 prices begin at $64,200. You can save nearly $5,000 on each model by choosing the “European Delivery” option, where you fly to Munich, Germany, to pick up your new M. Drive it around while there and then BMW will ship it back to the States as part of the deal. What a great way to vacation – especially when you’ll have so much to look forward to once you get home.