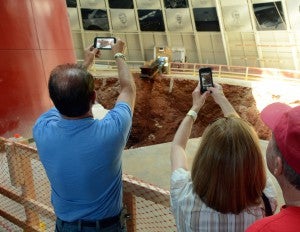 Attendance at the National Corvette Museum jumped 66% after a sinkhole opened up under the site.

Practicality won out over history as the National Corvette Museum’s board elected to fill in the sinkhole that gobbled up eight vehicles, but also more than doubled attendance at the facility.

The museum contemplated keeping the sinkhole as a permanent display – attendance has risen 66% and revenue 71% since it formed in February – but when the costs for the project soared the board put the project to rest.

“We really wanted to preserve a portion of the hole so that guests for years to come could see a little bit of what it was like, but after receiving more detailed pricing, the cost outweighs the benefit,” said Museum Executive Director Wendell Strode in a statement.

“At the June board meeting, the information available at that time indicated a cost of around $500,000 more to keep the hole, but after incorporating additional safety features and vapor barriers for humidity control, the price tag rose to $1 million more than the cost to put the Skydome back how it was.” 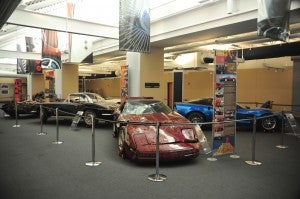 The National Corvette Museum displayed the "Great 8" cars that fell into the sinkhole as part of new exhibit. Three of them will be restored.

The plan has now changed to put five of the eight Corvettes that cannot be restored on display as is to help chronicle the event, including:

During construction, which begins in November, visitors will be allowed to watch the construction associated with the repair of the hole through a plexiglass wall. No timeframe was given for completion of the project.

(Click Here for details about Motor City, Motown and jazz.)

(To see about Helsinki’s plans to cut down on cars in the city, Click Here.)

“Our goal was to help the National Corvette Museum recover from a terrible natural disaster by restoring all eight cars,” said Mark Reuss, GM executive vice president, Global Product Development, in a statement.

“However, as the cars were recovered, it became clear that restoration would be impractical because so little was left to repair. And, frankly, there is some historical value in leaving those cars to be viewed as they are.”