Volvo Likely to Begin Importing from China in 2015

Maker will focus on stretched version of new S60 model. 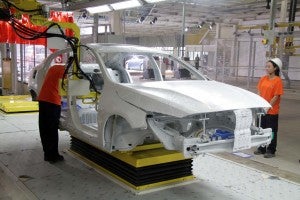 The Volvo S60L sedan, which is assembled at the new Volvo plant in Chengdu, could be the first vehicle exported from China to the U.S.

Despite years of promises, Chinese automakers like Chery Automotive and BYD have yet to follow through by importing their products to the United States. But the long drought is expected to come to an end next year, and the first automaker to ship a Chinese-made vehicle to the U.S. now appears likely to be Volvo Cars.

Purchased by China’s Zhejiang Geely Holdings in 2010, Volvo is now operating two factories in the fast-growing Asian country, with most of the capacity earmarked for local buyers. But the Swedish brand’s chief executive officer says it is preparing to export at least one of those products next year.

“A very likely candidate” is the long-wheelbase version of Volvo’s S60 sedan, the maker’s CEO and President Hakan Samuelsson said in response to a question from TheDetroitBureau.com, adding that a target date “sometime in 2015” is “absolutely likely.”

The S60L was developed specifically for China, and it reflects one of the peculiarities of the Chinese market, the fact that a large percentage of buyers, especially those in luxury vehicles, tend to prefer being chauffeured, rather than driving on their own. That said, there has been a growing market for extended length luxury sedans in Western markets, notably including the United States, where long-wheelbase version of such models as the Jaguar XJ and Audi A8 have become popular.

The fact that Volvo would be the first manufacturer to export Chinese-made vehicles to the U.S. might come as a surprise to casual observers considering the depth of the trade between the two countries. And, indeed, a number of local Chinese automakers have talked about the opportunities, notably including BYD, a battery-electric vehicle maker that has gone as far as establishing a U.S. headquarters in central Los Angeles.

But so far, several factors seem to have thwarted previous efforts:

Early European crash tests of some Chinese-made products fell abysmally short of where the industry has moved, for example.

But Volvo’s vice president of product strategy, Lex Kerssemakers, insisted that Volvo is not only pleased with the quality and reliability of the cars rolling off its Chinese lines, but also is convinced they are equivalent with the vehicles the maker now produces on its European assembly lines.

(Click Here for details on GM’s new IT Innovation Center in Arizona.)

There are several reasons, in turn, that Volvo would want to take advantage of its Chinese production base to supply the U.S., in particular. For one thing, it wouldn’t face the exchange rate penalties of producing cars valued in the Swedish kronor, which has been trading at a premium against the American dollar. The Chinese RMB is effectively pegged against the dollar.

And since the S60L is already being produced in China, the low volume expectations would make it hard to justify adding tooling in Sweden to produce the long-wheelbase version.

(To see more about the auto industry outperforming other industries, Click Here.)

Longer-term, if Volvo meets its goal of boosting sales from around 460,000 this year to 800,000 by decade’s end, it could run short of European capacity, but with two factories in China, it might find it easier to dedicate some of that output to the U.S.

Whether Volvo might expand the number of products shipped from China to the U.S. remains to be seen, the S60L likely to serve as a test for future programs. But CEO Samuelsson also noted that Volvo is looking at the possibility of adding a plant in the U.S. or somewhere else in North America.