Russia Ready to Retaliate – and Automakers Could Take a Big Hit

One unexpected winner could emerge. 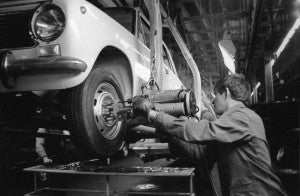 A worker on the AvtoVAZ assembly line in Togliatti, Russia, a plant now run by Renault-Nissan.

Slammed by sanction for its role in the Ukranian revolt, Russia is warning it may tighten retaliatory sanctions against the West by banning automotive imports.

The crisis in the Ukraine has made stock traders around the world nervous, leading to some major swings in key indexes and raising fears about the overall strength of the European economy, which is just beginning to recover from a steep recession.

But retaliating against Western automakers could have unforeseen consequences for Russia itself as it struggles to build momentum for its own economy. Car sales in the heart of the former Soviet Union also slumped badly along with the rest of Europe.

There currently are no sanctions relating to industrial manufacturing businesses or global carmakers making or selling cars in Russia, IHS Automotive recently noted. However, since virtually every major global OEM has a manufacturing presence in that country, both in the form of wholly- owned manufacturing plants and joint venture assembly projects with local manufacturers, there is ample potential for Russia to impose sanctions, according to IHS.

(Ford, GM take hits due to uncertainty in Russia. Click Here for more.)

Russian Minister of Foreign Affairs Sergei Lavrov stated last month Russia would not respond to Western sanctions with tit-for-tat measures, although there is likely to be some impact for Western businesses operating in Russia in the short-term, including countermeasures that Moscow has until now sought to avoid due to the domestic economic impact.

Any new round of sanctions would put further downward pressure on the Russian economy, analysts note, even while hitting foreign companies such as Ford, General Motors, Mercedes-Benz, Fiat Chrysler, Renault Nissan and Volkswagen – all of whom have significant interests in the domestic Russian market.

The trouble in Russia and the Ukraine is a particular concern for European manufacturers, looking to one of the more promising of the so-called BRIC markets. Russia was expected to emerge as the largest nation market in Europe within the next decade and, IHS noted, that was seen as a good way to offset problems carmakers like Fiat and Volkswagen were experiencing at home.

(VW could top 10 million sales this year, an industry first. Click Here for the rest of the story.)

Carmakers with a big stake in the Russian market are already facing something of a double blow. From the beginning of the year structural issues with the Russian economy, including the weak ruble and lack of investment, have eroded consumer confidence and increased prices, according to the IHS analysis, leading to an overall decline in Russian car sales of 7.6% for the first half of the year.

The decline accelerated further with a 17.3% drop in June, raising concerns that car sales will fall sharply in the second half of the year.

IHS Automotive’s light vehicle forecast for Russia noted credit  availability has become an issue in the wake of western sanctions, which have limited outside lending to Russian banks.

“Along with the decision of the Central Bank of Russia to increase the key rate from 7.5% to 8% annually this could force the banks to raise interest rates, so that the cost of borrowing will increase,” the report noted, adding that, “This would hit mostly the budget and volume segments, where the share of loan-financed purchases is high.”

During the recent boom years in the Russian market, from 2008 to 2012, as much as half of all car purchases were financed. According to IHS, in the first six month of 2014 that plunged to 18.8%. Further ruble depreciation could become the second important negative factor to impact the market as it would make cars more expensive.

The study said the Renault-Nissan Alliance will be watching events extremely closely as the foreign manufacturer that has invested the most in the Russian market. In June the Euro-Asian alliance completed the deal to gain control of the new holding company that controls Russia’s biggest home carmaker AvtoVAZ.

Surprisingly, in the second quarter of 2014 the consumer confidence index in Russia increased by 5 percentage points compared to the previous quarter. Yet, at an overall score of -6%. it still remains in the negative range.

(FBI raids home of former Ford engineer who may have been stealing trade secrets. Click Here for the story.)

Renault-Nissan may be insulated from any retaliatory sanction activity from the Russian government, as it is now so deeply involved in the fortunes of Russia’s largest carmaker. Renault-Nissan is already working with AvtoVAZ to modernize the firm’s main Togliatti manufacturing facility and updating the Russian maker’s archaic model range, with Nissan already manufacturing Nissan and Datsun branded passenger cars at the plant.

If the Russian government does decide to take punitive and retaliatory action that affects foreign carmakers this could actually turn out to be a boon for AvtoVAZ and Renault-Nissan, with the environment potentially made more difficult for foreign OEMs to manufacture cars in Russia and import other vehicles into the country.