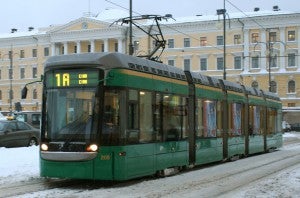 Helsinki is considering a plan that would severely limit private ownership of cars, but allow greater flexibility in its public transportation in the city limits.

With traffic congestion getting worse by the year, amidst growing concerns about the automobile and the environment, a number of cities around the world are taking steps to reduce, or at least limit the growth in, the number of privately owned vehicles on the road.

Helsinki, Finland, is considering what is being described as a “truly transformative” plan that could all but do away with private car ownership entirely, in favor of carsharing, bikes and public transport. Perhaps the most significant piece of the plan would let residents pay a flat fee that would cover any and all of their urban transportation needs.

“The major innovation that makes this work will be an integrated payment system,” according to a new study by Navigant Research. “This part of the scheme may prove the most complicated to implement, but it is the final piece of the puzzle that makes this scheme truly transformative.”

This would make it easy for a Helsinki resident to go where they want, when they want, the study added, “without needing a car.” What city officials are describing as a “mobility on demand” approach would let residents specify where they want to go and would then come up with the best options they could choose from.

But one of the central tenets would be the idea of the automobile as only one option, and not something that every citizen would need or want to own.

Helsinki already has one of the better public transportation systems in Europe and, despite its frigid winters, citizens can be seen out and about in all sorts of weather on bikes or simply walking. So, it appears, they might be open to the idea of making a car just part of a broader transportation solution – and one that they share, rather than own.

“The concept is the transportation version of other businesses that are moving from selling a product to selling the service or utility the consumer wants from that product,” said Navigant. “Planned obsolescence no longer makes good business sense, and consumers can benefit from constant improvements in technology.”

Helsinki is by no means the only city considering ways to reduce automotive usage, even eliminate cars entirely. London has had a costly and restrictive commuter tax in place for more than a decade. A growing number of Chinese cities, including Beijing and Shanghai, have put in place limits on the number of new vehicle registrations they permit each month. And Hamburg has been studying a plan that would phase out automobiles entirely from the central city in the coming decade or two.

Some automakers, including BMW, Mercedes-Benz and Ford, have begun embracing the carsharing concept, recognizing that in some parts of the world, it may be the only way to maintain a strong market for their products.

Volvo, meanwhile, is studying an idea similar to Helsinkis, one that would integrate a wide variety of different transportation systems – though it would still involve private ownership.

Working with telecomm giant Ericcson, the partners are developing a system in which a motorist might purchase a monthly pass that could include payments for highway tolls, parking, train travel and more – indeed, the approach could incorporate coffee and donut incentives, a spokesman for Ericsson suggested during a demonstration of the concept in Stockholm.

(To see if GM is playing a shell game with its new production plans, Click Here.)

What seems clear is that urban planners are no longer content to let the automobile dominate transportation options in many cities. Helsinki’s plan may be radical, but it could foreshadow other options that downplay the role of the car.