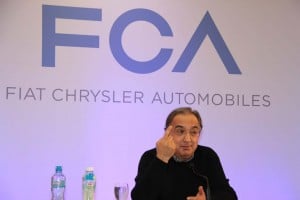 CEO Sergio Marchionne is confident any shareholder backlash will only be a temporary roadblock.

Disgruntled Fiat shareholders could –  temporarily – thwart the completion of the Fiat-Chrysler merger, Sergio Marchionne, chief executive officer of both the Italian and American automakers, conceded.

During a conference call today with analysts and journalists, Marchionne emphasized that an adverse vote would not have a long-term impact on the meshing of the two companies.

“We have to see how this game plays out,” Marchionne said during the call. “I am absolutely unfazed by this.”

With Italy teetering on the brink of recession and Fiat stock losing value, speculation is mounting that some Fiat shareholders may opt to cash out rather than accept stock in the new company.

As part of the merger, the stock has a strike price of 7.72 euros per share, which is appreciably higher than Fiat’s current trading value of 6.50 euros per share.  The company has allotted 500 million euros to handle that option.

If too many shareholders tender their shares and exceed the 500 million euros, the merger will be called off, Marchionne said, adding cap size is firm and won’t be manipulated to make the deal work. Instead Fiat and Chrysler will simply put off the deal until the outlook for completing the merger is more propitious, Marchionne said.

“I think the press has overplayed the negative reaction (to the merger),” added Marchionne, who said he still believes the merger will be approved by Fiat’s shareholders. “We’re paying the price for over-reaction. If we trigger the 500 million (euro) cap we’ll wait.”

Under Italian law, Fiat shareholders have until Aug. 20 to either approve the merger or exercise their “put,” giving them the right to sell their shares at the specific price. It will probably take several days for Fiat’s investor relations staff to sort out the actual results, Marchionne said.

The vote will have absolutely no impact on the day-to-day operations of Fiat and Chrysler, which are moving ahead with the merger, he said.

Marchionne disclosed that Richard Palmer, Chrysler’s chief financial officer, is in the process of moving from Auburn Hills to London where the headquarters of the Fiat Chrysler Automobiles will ultimately be located. In addition, other corporate staffs are moving to the new London headquarters.

In May, Marchionne indicated the staff of the London headquarters will be relatively small, roughly 100.

Marchionne also said he was confident that Fiat Chrysler will quickly resolve the new legal issues that have cropped up in China where the Chinese believe Fiat and Chrysler have engaged in monopolistic practices.

The Chrysler CEO also said he has no interest in building a new factory in the United States to meeting rising demand for Chrysler products.

“We’ll continue to push the limits of the current production capacity,” he said. “But I’m reluctant to engage in wholesale production expansion in the U.S.”

However, Chrysler could pull some Jeeps from its overseas distribution network to satisfy customer demand in the U.S., though he is reluctant to put pressure on overseas distributors, many of whom are handling Chrysler products for the first time, Marchionne said.

(Those ubiquitious red-yellow-green traffic signals are celebrating their centennial. Click Here for the history of the stoplight.)

Chrysler is also working with suppliers to reduce costs and improve margins but he doesn’t want to be overly aggressive because of the need to foster longer-term relationships and to avoid production bottlenecks and quality issues.

Marchionne also said that the industry a whole, while it’s being challenged by regulators over subprime lending, is a long way from the overly generous credit standards that prevailed in the years prior to the 2008 recession.

“We’re miles away from the hoggish behavior we saw in the 2004 to 2008 world. We’re not seeing an alarming increase in subprime. We’re still in what I consider normal trading conditions,” he said.