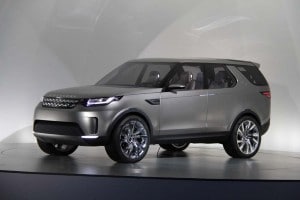 Reports suggest that this Land Rover Discovery concept may be the basis for five- and seven-passenger vehicles from Indian automaker Tata.

After long maintaining a strict wall between their engineering and design departments, British maker Jaguar Land Rover may finally be ready to work more closely with its Indian parent Tata Motors.

A report from India indicates two new SUVs planned by Tata will ride on a platform shared with Land Rover. The vehicles are also expected to offer a new line of powertrains developed by the Jaguar Land Rover group that will be used in such future British models as the Jaguar XE sedan and Land Rover Discovery.

Rumors of such a project have been circulating for months on outlets as diverse as the Economic Times, Autoblog and TheDetroitBureau.com. The latest to pick up – and add some significant details – is Indian website Live Mint. It reports that Tata will use Land Rover’s platform for both five- and seven-passenger SUV models.

Such a move could prove critical for the Indian brand which has struggled to gain traction both inside its home market and on a broader scale. Tata officials said at the time they bought JLR from Ford Motor Co. that they hoped to learn from the luxury maker in a bid to become a global manufacturer. At the same time, Tata also stressed that it wouldn’t risk diluting its British subsidiary by badge engineering products under its own name.

How it now plans to walk that fine line remains to be seen, but Tata clearly needs help. It had tried targeting the absolute rock-bottom market with its primitive Nano, only to find itself lambasted because of quality problems, including a series of fires that have made for good viewing on the Internet. Now it hopes to move a bit more upmarket with products that could eventually have some appeal beyond India.

Live Mint identifies the two products under development as the five-seat, two-row Q501 SUV, and a seven-seater code-named Q502.

In quotes an anonymous supplier working on the project as saying, “This is part of a long product pipeline till 2020, an approval for which has been received from the Tata board.”

One reason Tata may not have pushed to share technology with JLR before was the vast difference in prices – and costs – which made it hard to use a Jaguar or Land Rover platform for one of the Indian brands. But Live Mint quotes a source saying the company and its British subsidiary have “managed to crack” the code, allowing some cross-sharing. If accurate, it indicates as much as half of the parts on the Land Rover Freelander would be used by Tata for its new utes.

Apparently, Tata might also want to share the new Ingenium line of engines JLR is developing, though how it hopes to accomplish that, considering the costs of those sophisticated powertrains remains to be seen.

(Click Here for details on Toyota’s plans to expand production in Indiana.)

If it could solve that issue, Tata just might have itself a real advantage in the increasingly competitive Indian market – while also opening up opportunities outside the country.

(To see the end of an era at Ford, Click Here.)

In turn, spreading engineering costs could offer some advantages to Jaguar Land Rover, as long as it doesn’t lead to dumbing down the British brand. So far, Tata has been quite generous, JLR officials have told TheDetroitBureau.com, offering up billions of dollars in resources that the long product-starved maker has needed – as the launch of a wide range of new models, including the planned XE clearly demonstrate. It may now be payback time.