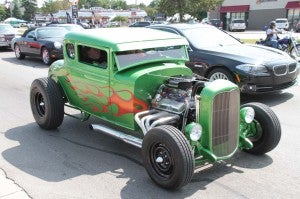 A "flamed" hot rod, one of from 40,000 to 60,000 classic muscle cars, hot rods, sports cars and other collectibles expected at the Woodward Dream Cruise.

For Bob Wissman, standing on the corner of Woodward Avenue in Royal Oak, Michigan is a trip down Memory Lane. As a teenager in the 1960s, even before he was old enough to drive, he’d hitchhike along Metro Detroit’s main drag, hoping to catch a ride in a Ford Mustang, a Pontiac GTO or, if he was lucky, a Chevrolet Corvette.

Woodward Ave. was Ground Zero for muscle car fans and, back then, you’d even catch some executives, like General Motors’ legendary maverick John DeLorean, showing up late at night to street test a new performance car against their competitors.

The days of cruising are long past – well, not entirely. As summer enters its dog days, the echoes of screeching tires and the resonant roar of big V-8s can be heard up and down Woodward Avenue, a crescendo building by the day as the Motor City gets set to celebrate its heritage with the annual Woodward Dream Cruise. 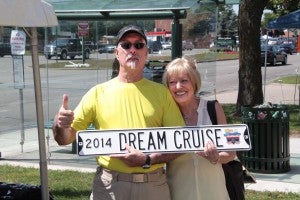 Bob and Roxanne Wissman spent Friday gathering collectibles, but will be cruising on Saturday.

What started out as a get-together organized by a local car club has become what organizers now bill as the single-largest automotive gathering anywhere. The officially sanctioned Saturday Cruise is expected to draw out anywhere from 40,000 to 60,000 hot rods, muscle cars, classics and collectibles – while up to 1 million or more people will squeeze shoulder-to-shoulder along the curb to watch the action go by.

“It gets bigger and bigger every year,” gapes Wissman, noting that while Saturday might be the official Dream Cruise, muscle car fans can get their fix anytime the week before as mundane sedans and minivans slowly make way for the classics.

As many as 1 million people are expected to check out the 20th Woodward Dream Cruise: Photo: Len Katz.

(Dodge giving the Hellcat treatment to the 2015 Charger. Click Hereto check it out.)

Participants are known to bring out just about anything with wheels and a motor – from a powered shopping cart to million-dollar Ferraris. But the emphasis is on classic Detroit metal – the same machines that cruised the 8-lane boulevard on warm nights during the heyday of the muscle car, in the ‘60s and ‘70s. 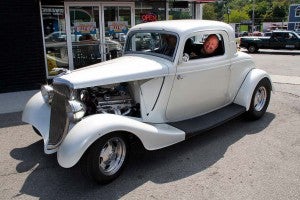 Tim Cooley has had a lot more fun since getting his '34 Ford 3-window coupe, he says. Photo: Len Katz.

Tim Cooley, of Clarkston, Michigan, turned out in his ’34 Ford 3-window coupe, a hot rod he carefully put together out of a rusting hulk he got his hands on back in 1934.  It’s given him a chance to not just relive his youth, but go one better.

“I always rode here when I was a kid,” he recalls. “Now that I have something worth showing, it’s even more fun.”

A hunka-hunka burning love for this classic Corvette. Photo by Len Katz.

While the Dream Cruise is a home-grown phenomenon, it has developed a global reputation, and a surprising number of cruisers and gawkers have come to see it as a sort of mecca that they must attend at least once. Steve Pasteiner, who runs a car parts and collectibles shop along the route in Birmingham, Michigan has seen them come from all over, including one Australian who spent $17,000 to ship his car to the Motor City so he could ride, rather than just watch. 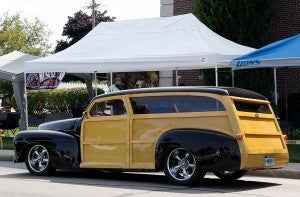 A customized "woody" wagon with an appropriate license plate. Photo by Len Katz.

“We had a couple guys come in fully decked out as cowboys, and I figured they were from Texas,” Pasteiner says, laughing at the memory. “But they couldn’t speak a word of English. They’d flown in from France.

Tom Tolles only traveled from Jackson, Michigan, about a 100-mile drive, though he and his son Trever had a hotel room nearby so they could alternately cruise and park for three days.  He was making up for lost time, he sheepishly said, admitting he was one of the few Michigan “gearheads” who hadn’t cruised Woodward in the old days.

Steve and son Steve Pasteiner have seen Dream Cruise visitors from as far away as Australia and France.

Asked what the appeal was of the Dream Cruise is today, Tolles seemed almost surprised by a question that might seem self-explanatory, “We’re car guys. It’s a car life, a car world,” he said, quickly adding, “I like the smell.”

Just about anything goes during Dream Cruise.

It’s become something of a gospel that young people today don’t really have gasoline in their veins like generations past. But quite a few parents, like Tolles, were intent on inculcating their children into that car world. That included Doug Harrison, of Chesterfield, Michigan, who was showing off some of the best hot rods and muscle cars to 12-year-old daughter Hazel as they walked down Woodward.

(Ferrari 250 GTO sets all-time auction sales record. Click Here to find out how much it went for.)

Plenty of collectibles along the route. Photo by Len Katz.

“I like it,” she said, beaming broadly. “I like looking at all the different cars. They’re just really cool.”

As for her father, Doug Harrison said he’d rather sit on the sidelines and watch the parade of cars stream by, lamenting “I’m not lucky enough to have something worthy” to drive in the Woodward Dream  Cruise this year. There’s always next year, of course, and perhaps he’ll be able to get his daughter to help turn an old rusted heap into something they both can go cruising in.