But majority want something done. 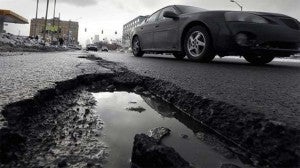 Whether in traffic-congested California, or in Snowbelt states like Michigan, the nation’s roadways are in rough shape, a problem that not only causes fillings to jar, but adds to costs in terms of slower truck traffic and vehicle repairs.

But the need to fix America’s roadways is about the only thing taxpayers can agree on. How to pay for those repairs is an issue dividing the country, according to a new Associated Press-GfKpoll.

A solid majority, six out of 10 of those surveyed, said that the need for good highways, railroads and airports justifies their cost. And the figure goes even higher, to 62%, among those who drive regularly. Even among those who get behind the wheel less than once a week, the figure is a solid 55%.

Last week, just before leaving Washington for their summer recess, federal lawmakers pulled together a last-minute, $10.8 billion transportation spending package. But the jury-rigged spending bill begged and borrowed money that critics contend will barely keep up with the growing demands of an aging infrastructure. And it’s only enough to tide things over until next May, temporarily saving aid payment to states that the Department of Transportation was close to cutting.

The longer-term need to fix the federal Highway Trust Fund wasn’t addressed. Considering the results of the AP-GfK random online survey – which  was posed to 1,024 American adults between July 24 and 28 – it would seem that Capitol Hill is risking the wrath of a frustrated public. But there’s a flip side to the results.

Unlike most taxes, which are percentage-based, the federal gas tax is set at a fixed amount, 18.4 cents per gallon of gasoline, and 24.4 cents for diesel fuel. The figure hasn’t been raised in more than two decades, and recalling the backlash the last time, lawmakers have been loath to seek an increase now. And the survey says they have majority support, 58% of the public opposing any increase in the federal gas tax, even if the money would specifically go to road or bridge repairs and improvements. Only 14% said they support a tax hike.

Lawmakers around the country have been looking for alternative ways to raise highway funds. California is one of a number of states where private corporations have been brought in to build new highways – in turn being allowed to charge tolls. Others have turned to private firms to manage existing facilities. But opposition to such moves may be the thing that most clearly brings the public together, fully two-thirds saying they don’t support privatization.

Another idea gaining momentum in some legislative circles hasn’t resonated well with the public, 40% responding in opposition to so-called usage taxes, only 20% supporting the idea of charging motorists based on the number of miles they drive.

That approach may yet gain traction, some analysts suggest, as the nation’s automotive fleet shifts from classic gas guzzlers to more efficient vehicles, as well as those running on alternative energy sources. By 2025, the Corporate Average Fuel Economy standard, or CAFE, will rise to 54.5 mpg, nearly double the figure in place when the Obama Administration took office. If the federal gas and diesel taxes weren’t raised, it would mean that motorists effectively were paying half as much on a per-mile basis.

(Click Here for details on the potential threat to the Fiat-Chrysler merger.)

And even today, hybrid and electric-vehicle owners are effectively paying less of their share even as the need for major road repairs rises every year.

(To see more about the improving fuel economy of new vehicles, Click Here.)

At a time when many citizens would like to see power shift from the federal to state governments, that apparently doesn’t hold true when it comes to paying for transportation costs, only 30% of respondents saying the states should pick up a larger share.

“Congress is actually reflecting what people want,” Joshua Schank, president and CEO of the think tank the Eno Center for Transportation, told the Associated Press. “People want to have a federal (transportation) program and they don’t want to pay for it.”