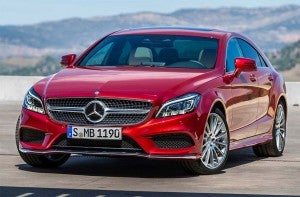 The visual changes are subtle, as Mercedes puts the emphasis on tech with the 2015 CLS.

Peekaboo. The new 2015 Mercedes-Benz CLS can see you – thanks to a sophisticated new Multibeam LED headlamp system that can adapt to traffic, swivel around corners, and even anticipate the road ahead thanks to its camera and navigation systems.

From a styling standpoint, Mercedes largely stays with the swoopy shape that has made the CLS the benchmark in the coupe-like sedan segment. About the only notable exterior changes come with a revised bumper and larger air intakes.

The focus of this mid-cycle update is on the technological side, but there fans will find plenty, from the new Multibeam LED lamps to the 8-inch infotainment display featuring the newest version of the Mercedes COMAND system.

The other big news for 2015 is the upgraded powertrain line-up which now includes a turbocharged 3.0-liter V-6 in the new CLS 400. There’s also a new, more fuel-efficient 9-speed automatic. 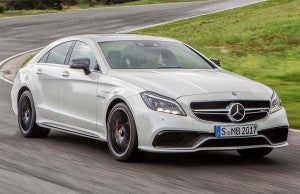 Since its debut during the 2005 model-year, few vehicles have had more of a dynamic impact on automotive design. These days, even the most basic sedans have been migrating  to a more coupe-like shape. No wonder the German maker was so cautious when it launched the second-generation CLS in 2010 – and now with a mid-cycle update, it is putting the emphasis on technology.

(The Mercedes-Benz CLS is one of the leaders in the new JD Power Initial Quality Study. Click Here for the full results.)

There’s also been a lighting revolution in recent years. LED lamps are becoming increasingly common, whether for accent or to replace the actual headlights. But Mercedes is going a step further with the Multibeam system pairing 24 separate bulbs that can be individually controlled up to 100 times per second.  They can be swiveled, for one thing, to help light your way as you enter a corner.

They also can be dimmed, in 255 steps, depending on what your lightning needs are, and to avoid blinding oncoming traffic. The system relies on the camera that also works with a number of other onboard safety features. But it also is linked to the car’s navigation system. This can allow the intelligent controller to begin turning the lamps even before you enter a corner.

(Click Here to check out the latest on the upcoming Mercedes GT sports car.) 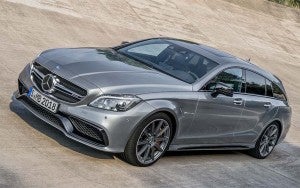 Mercedes hasn't yet said if it will bring the CLS Shooting Brake to the US for 2015.

Mercedes has rapidly been expanding the use of various high-tech features that debuted, barely a year ago, on its all-new S-Class.  That includes the latest versions of its Collision Prevention Assist Plus, which can not only alert the driver to a potential crash but begin braking autonomously. There’s Cross-Traffic Alert, pedestrian braking, and plenty more.

The updated infotainment display is not only easier to read but, Mercedes claims, simpler to use with the new COMAND system and the new Linguatronic voice control system.

From a powertrain standpoint, the new 2015 Mercedes CLS also has plenty to talk about. Though not officially confirmed don’t be surprised to see the new CLS 400 come to the States, and with that turbo-six making a solid 333 horsepower, it will be hard to think of it as a “base” model.

(Hyundai hopes to take on both Mercedes and BMW with newly redesigned Genesis sedan. Click Here for a closer look.)

Mercedes recently added a CLS Shooting Brake, or wagon, model. Whether it will make it to the U.S., along with the CLS 400, should be announced closer to the official launch of the 2015 model-year.  We should see formal pricing then, as well.