Leaders note other unions have raise dues in recent years. 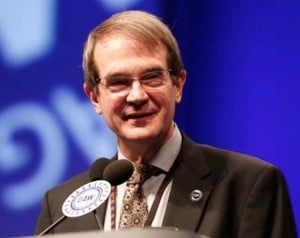 Outgoing UAW President Bob King is asking union members to approve a hike in their dues. It would be the first increase since 1967.

The United Auto Workers will take up the contentious issue of raising dues as the UAW’s convention moves into its second day in Detroit.

The union has not raised dues since 1967 while other unions, such as the United Steel Workers and Teamsters, have raised dues over the last decade. The UAW has been slow to follow suit, said Bob King, the UAW’s outgoing president.

Top union officials have been discussing the dues increase, which would boost dues from the current two hours of wages per month to two and a half hours of wages, for the past several months. But they have admitted to getting some push back from unhappy members.

“We’re listening to what our members have to say,” said UAW vice president Jimmy Settles said during a recent visit to a Ford plant in Ohio.

However, King has defended the increase claiming it is necessary to bolster the union’s strike fund, which has shrunk to $533 million, and to pay for organizing drives at plants in South. The dues increase is expected to raise approximately $49 million annually.

“The fastest way to get rid of the two-tier wage is by organizing the competition,” King said during a speech to the convention yesterday. Demanding equal wages from different employers was one of the trademarks of the union’s pattern bargaining in different part of the automobile industry during its heyday in the three decades after World War II.

The union’s bargaining power has been eroded by the non-union assembly plants erected by Asian and European automakers in the South.

“The amount of power you have determines the amount of justice you get,” King told the delegates.

King also said during an interview that the union has been working on slashing expenses and selling off unused assets, mostly real estate, that it had accumulated before its membership began to shrink after reaching a high of 1.5 million members. The UAW now has about 395,000 members.

One of the largest budget cuts was recently negotiated with the UAW’s own staff. The group agreed to create a voluntary employee benefit association (VEBA), which the union will initially fund, to pay for retiree health care benefits.

The UAW, which has about 2,900 retirees, now pays for retiree health care out of operating expenses. The shift to a VEBA will eventually save the union between $15 million and $20 million annually.

King said the money saved will be used to help finance organizing drives. The union is setting aside a total of $60 million for organizing drives during the next four years. The money, however, is not used for political campaigns, which are financed out voluntary contributions from union members.

The union’s board of directors, however, is bracing for criticism during the dues debate.

“The inability of the UAW to organize VW Chattanooga and the other transplants is not for lack of organizing money, but concessionary UAW bargaining over the years that has given rise to Tier 2 wages and no wage increase for long-time Detroit 3 autoworkers in 12 years,” Gary Walkowicz said during a debate on a resolution over organizing.

(Click Here for details about the obstacles facing self-driving vehicles.)

The UAW needs to get tougher in bargaining to demand additional wages and benefits as a magnet to the transplant workers, he said.

(To see more about the investigation of Chrysler SUV airbags, Click Here.)

“They are not going to join if they don’t see the benefits,” Walkowicz said. “The union has its approach upside down,” added Walkowicz, a committeeman at UAW Local 600 in Dearborn, Michigan. He has been one of King’s critics and is challenging the heavily favored nominee of the administration caucus, which has run the union for decades, for the union’s presidency.