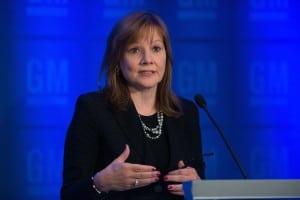 GM CEO Mary Barra has presided over the bulk of the largest number of recalls in U.S. auto history.

Most of the time breaking a record is followed by celebration and jubilation; however, with the recall of 7.65 million vehicles today — nearly 8.5 million worldwide — General Motors helped U.S. automakers secure a record none of them want to be part of: the most vehicles ever recalled in a single year. Worse than beating the record is that it only took six months to do it.

With the latest action, the new total is 39.85 million vehicles, easily surpassing the previous one-year record of 33.01 million set in 2004.

GM’s latest announcement covers six new recall campaigns — bringing to more than 40 the total number of separate safety-related service actions it has taken this year. GM alone has been responsible for the recall of more than 26 million vehicles since January. By comparison, the entire industry called back just 27.96 million vehicles last year.

Keenly aware of the growing damage to its reputation, GM CEO Mary Barra said in a statement, “We have worked aggressively to identify and address the major outstanding issues that could impact the safety of our customers.” But Barra also signaled GM’s recall blitz is not necessarily over, adding that, “If any other issues come to our attention, we will act appropriately and without hesitation.”

GM may have run up more recalls in one year than any other maker in history, but it is far from the only maker having some serious safety headaches. Toyota, Nissan, Honda and Mazda recalled more than 5 million vehicles worldwide in June due to airbag problems. And a half million or more Nissan and Ram vehicles are now under investigation by the National Highway Traffic Safety Administration due to various reports of trouble.

But the big question is why are there so many recalls this year?

Joe Hinrichs, president of the Americas, Ford Motor Co., told TheDetroitBureau.com last week there are “unique circumstances going on in the industry” right now. That said, Hinrichs insists Ford has not changed its corporate approach to recalls.

Ford may have a unique perspective on the current flurry of recalls. It wasn’t that long ago it was the poster child for automotive recalls due to the Firestone and Explorer debacle at the beginning of the decade.

“We always study what’s happening with our competitors,” he said, adding that the Dearborn, Michigan-based maker is paying close attention to GM. Hinrichs said the high number of recalls shows automakers are acting prudently to ensure consumer safety.

“With what’s transpired (in recent months), there’s a higher level of scrutiny” across the industry, he said.

While many look at the dizzying number of recalls as a sign of poor quality or lackadaisical attitudes about consumer safety, Hinrichs believes the recalls reflect the opposite.

“There is so much data out there you can act very quickly to protect your customers. There is a lot more data to work with in real time,” he said.

(Click Here for details on GM’s latest set of recalls.)

GM kicked off the frenzy when it recalled 2.6 million small cars for a problem with the ignition that would cut power to the vehicle, in particular the airbags. The problem is associated with 54 injuries and 13 deaths, according to GM, although critics suggest the totals are much higher.

However, GM isn’t alone in this. Japanese automakers, once considered beacons of quality, have endured substantive recalls this year as well. Just since the beginning of this month, Japan’s five largest automakers have recalled nearly 6 million vehicles due to airbag problems.

(To see more about the lead up to breaking the recall record, Click Here.)

This record number of recalls covers a number of different parts as well as external factors, such as high temperatures and humidity to simple electrical connections that need to be resoldered.