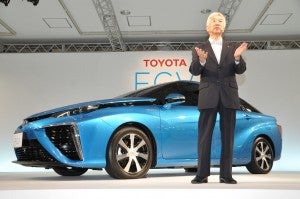 In the battle for zero-emission vehicle supremacy, everyone now knows what the latest entrant – Toyota’s FCV – will cost: about $70,000.

The Japanese automaker announced pricing on its new fuel cell vehicle, which will be available in Japan starting next spring. About the size of a Camry, the car is expected to come to the U.S. and Europe sometime that summer.

It will join Hyundai’s Tucson fuel cell and a slew of others on the way, on the fuel cell side of the ZEV-side of the aisle, while the Tesla Model S and other EVs sit on the battery electric side.

With a range of just over 430 miles and a refilling time of just three minutes, the FCV has some advantages over its EV competitors, especially when it comes to topping off the batteries. Perhaps the biggest critic of fuel cells is the founder of the aforementioned Tesla Elon Musk.

“As people probably know, I’m not the biggest fan of fuel cells – I usually call them fool cells,” Musk said during the company’s annual meeting earlier this month. In earlier public statements he’s called them “a load of rubbish.”

However, it’s likely those loads of rubbish are going to end up in the backyard of the Palo Alto, California-based EV maker. Earlier Toyota indicated it will introduce a modified version of its Tokyo concept vehicle in California, where there is a small but growing network of hydrogen fueling stations.  However, it will already have competition.

Hyundai, which this month is launching sales of its own hydrogen car, plans to offer the Tucson Fuel-Cell Vehicle for a flat lease price of $499 a month, a figure that will include all the hydrogen a customer can use.

Honda, meanwhile, also plans to get into the hydrogen car market or, more accurately, return to it with a follow-up to the FCX fuel-cell vehicle it leased a few years back, also in Southern California. And Mercedes-Benz and General Motors are also planning entries into the segment. The German maker also is testing a small number of so-called F-Cell hydrogen cars.

(To see more about Toyota’s FCV and other fuel cell vehicles, Click Here.)

Hydrogen power is seen by some as the ultimate clean fuel. The lightweight gas is combined with oxygen from the air inside a device called a fuel-cell stack. That creates a flow of current that can be used to power the same sort of electric motor drive system found in a battery car.