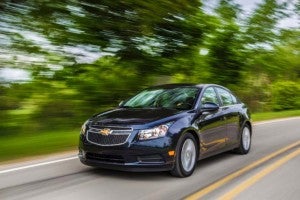 Barely a day after ordering the stop-sale of its popular Chevrolet Cruze model, General Motors has announced it will recall nearly 30,000 of the compact sedans because of the risk posed by improperly manufactured airbags.

It’s the latest in a string of nearly 40 recalls GM has announced in the U.S. since the beginning of the year impacting almost 18 million vehicles in its home market, and more than 20 million worldwide. In fact, the automaker’s safety woes extend well beyond North America, GM announcing it will recall nearly 200,000 Buick Excelle models sold in China due to faulty headlights.

The airbag issue at home is a serious blow to a company that has continued to insist it is struggling to put its safety issues behind it. But it also raises new concerns about the capabilities of one of the world’s largest suppliers of the supplemental inflatable restraints, Takata Corp., which has been responsible for a number of other recent recalls – even as it deals with issues related to bid-rigging and price-fixing.

The new U.S. recall involves 29,019 Chevrolet Cruze sedans. GM’s most popular passenger car, the maker on Wednesday told dealers to stop selling the 2014 model and leftover 2013s when it learned that Takata had used the wrong part in some Cruze driver’s side airbags. The problem could shred during a crash, sending shrapnel into the passenger compartment.

(No more firings in airbag scandal, says Barra. Click Here for the story.)

It’s the latest in a fast-growing series of airbag recalls in recent years. Hyundai , for example, had a shrapnel issue that nearly severed one motorist’s ear. GM, meanwhile, recalled about 1.2 million utility vehicles earlier this year because of faulty wiring that could cause their seat-mounted side airbags to mis-deploy.

And earlier this week, Nissan, Honda and Mazda collectively recalled about 3 million vehicles due to airbag problems that were all linked to manufacturing problems at Takata. Indeed, the same problem has now led to the recall of about 10 million vehicles worldwide, including those from Toyota, GM and BMW, as well. It is now one of the five largest automotive safety issues in automotive history.

“We’re starting to look more closely at the use of Takata airbags,” said a senior executive for Fiat Chrysler Automobile, asking not to be quoted by name since he wasn’t authorized to discuss the matter with the media.

Takata’s problems aren’t limited to faulty airbags. Earlier this month, an executive was indicted as part of the U.S. Justice Department’s ongoing investigation of corruption in the Japanese supplier industry. Four others have already been convicted, including three sentenced to jail last November. The head of the supplier’s American subsidiary was ousted late last year and replaced with a non-Japanese manager. Meanwhile, Takata agreed to pay more than $70 million in fines to settle the Justice Dept. inquiry into price-fixing and bid-rigging.

But it’s GM that will suffer the biggest black eye from the new Cruze airbag recall. The maker has been rapidly expanding the number of vehicles it plans to repair for various safety-related problems ever since it announced in February the decade-late recall of 2.6 million vehicles because of faulty ignition switches now linked to at least 13 deaths.

On Monday, the maker is expected to announce details of a new victims’ compensation fund connected to the switch issue. It will be managed by Ken Feinberg, who handled similar funds set up for 9/11 victims and those impacted by the BP oil spill in the Gulf of Mexico. He is expected to cover more than just the 13 confirmed fatalities, some observers predicting he could ultimately distribute more than $1 billion.