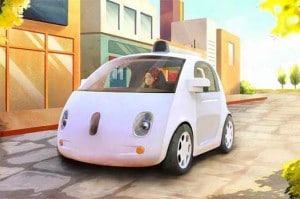 A production version of Google's autonomous vehicle prototype could be on the road by 2020 - maybe.

Google has announced plans to build 100 autonomous vehicles, with a goal of getting the technology into production by 2020, about the same time Nissan hopes to have its own self-driving cars on the road.

But not everyone is so upbeat, and some experts caution it could take another two decades before such vehicles can overcome the cultural and technical challenges that loom ahead for autonomous motoring.

Art Wheaton, an automotive industry expert and senior lecturer at Cornell University, said the announcement by Google for their autonomous vehicle may be “a trend for the near future,” but he cautioned that “I highly doubt individual car owners will give up their freedom to drive anywhere, anytime for the Google car.”

While the first Google prototypes will be equipped with conventional controls, the rest are expected to have nothing more than on/off switches, meaning there would be no way for a human to take control. And that is something Wheaton questions whether today’s motorists would accept – except under limited circumstances.

(Click Here to find out more about the Google self-driving prototypes.)

“It could be used in California for dedicated HOV lanes,” he suggested. “The success of the Prius in the United States owes a great debt to California HOV lane preferential treatment. People may pay for the convenience of a shorter commute and own two vehicles in the family. One for commuting and the other for family or pleasure travel,” Wheaton said.

But while it remains to be seen just how soon the first fully autonomous vehicles will go into production, there’s little doubt some of the same basic technologies are showing up in more conventional vehicles.

(Which autobrake systems worked best? Click Here to find out.)

Such technologies are being rolled out at an increasingly active pace; their prices are falling, as well, allowing them to become more common on mainstream, as well as luxury, vehicles.

Some of these technologies are designed simply to alert drivers to potentially hazardous situation, leaving a motorist fully responsible for avoiding an incident, explained  Akhilesh Kona, analyst for automotive semiconductors.   “In active-control systems, however, the mechanism takes over if the driver does not react to warnings so that the vehicle can avoid an accident or minimize the impact of a collision,” he said.

One way or the other, such technologies are undergoing a massive growth spurt.  The market for semiconductors used in these active-control systems will grow nearly fivefold in just seven short years, according to a new report from IHS Global.  The study said the expansion will be driven by an increasing shift from providing alerts in hazardous situations to direct intervention that can help avert accidents.

The value of these systems is expected to reach $883.9 million by 2020, up from $187.3 million last year. The nearly fivefold increase equates to a compound annual growth rate of 25% for the seven-year period.

“Overall, active-control systems are growing faster than passive-warning mechanisms,” said Luca DeAmbroggi, principal analyst for automotive semiconductors at IHS. “Compared to the phenomenal growth of the active-control semiconductor market, the chip market for passive-warning systems is projected to grow at a less furious pace from 2013 to 2020.”

The IHS report stressed that “entire ecosystem for autonomous vehicles” will need to be in place for the technology to become successful. That translates into – among other things, mandates, regulations and legislation shared not only across the U.S. but around the world.

Several states have already enacted rules for testing autonomous vehicles, but they require a trained driver to sit behind traditional controls, something that will be missing from the Google prototypes, requiring possible legislative changes. Whether the public – or government regulators – are ready to permit fleets of vehicles without steering wheels to roll across our highways remains to be seen.

Of course, the biggest challenge remains making sure that fully autonomous vehicles will be able to handle the unusual circumstances – the detours, road work and emergencies – that human drivers cope with every day.

“It’s a very challenging problem, one reason the nut isn’t cracked all the way,” cautions Chris Umson, the head of the Google autonomous vehicle project.  “There’s hard work to be done.”