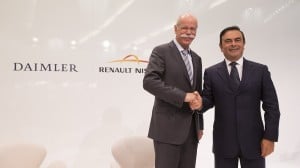 Announcing the biggest project in their four-year-old alliance, Daimler AG and Nissan Motor Co. have confirmed they will jointly set up and operate a new luxury car plant in central Mexico. At a cost of 1 billion Euros, or close to $1.4 billion, it will begin operating by 2017, the makers’ two CEOs revealed during a joint news conference.

There will be two separate lines, one for each brand, at the new luxury car plant – which will be erected on a portion of the new factory complex Nissan opened in the city of Aguascalientes last November. The factory will eventually employ “nearly 5,700” workers and will have capacity to produce about 300,000 vehicles annually, said Daimler’s chief executive Dieter Zetsche and Nissan’s Carlos Ghosn.

“Our biggest project yet,” stressed Zetsche, “it takes our partnership to the next level.”

The two carmakers – along with France’s Renault – first teamed up in 2010, announcing three joint ventures largely focused on the European market. With the Mexican plant announcement, that has grown to 10, Ghosn added, noting that it “shows how the alliance has truly gone global.” There are, the two executives suggested, other possible projects under study, though they declined to go into detail.

The announcement of the Mexican project, in fact, comes during the same week that production has begun at a Nissan-owned plant in Decherd, Tennessee that will produce 4-cylinder engines to be used for products produced by both the Japanese maker’s Infiniti brand and for Daimler’s Mercedes-Benz at its current factory in Alabama.

Originally reported by TheDetroitBureau.com last year, the new Mexican plant will be set up alongside the Nissan assembly facility that opened up outside Aguascalientes last autumn. A critical benefit, the two CEOs noted, is that it will be able to take advantage of Nissan’s existing Mexican supplier and distribution network to improve economies of scale – which translates into lower costs.

Infiniti has signaled that the production version of a Q30 concept vehicle it recently showed would be based on a platform shared with Daimler. It had been expected that this would be the small car “architecture” that is being used on such new models as the Mercedes-Benz CLA sedan and GLA crossover. But Ghosn noted that, “We did not want to be limited by specifications of existing platforms, which is why we are going for an all-new platform.”

Developing the platform and then designing the vehicles that will use it will take several years. Infiniti expects to launch its own production at the new plant in 2017, while Daimler won’t start building its first Mercedes model there until a year later.

“Tthe result will be products that are very different and consistent with very different brand identities,” stressed Zetsche, noting the partners’ believe that Infiniti and Mercedes tend to attract very different buyers and don’t compete directly, even though they may both have products in the same market segments.

Critically, the two executives stressed that while underlying components, from gas tanks to windshield wiper motors – and even powertrains – will be shared, what is visible to the customer will be very different.

Each maker will have a separate assembly line, though it will be possible that models from both brands could eventually wind up rolling down either of the lines.

(To see more about Matt Lauer creating a furor with a “mom” question, Click Here.)

The addition of the new plant will bring Nissan’s total production capacity in Mexico to 1.1 million vehicles – if all the cars to roll out of the luxury plant are included. The maker is already the number one manufacturer in the country, with a 25% market share.

But while Mexico is now one of the top carmaking countries in the world, its automotive market remains small, so a majority of the vehicles to be produced in Aguascalientes will be exported, Zetsche and Ghosn forecast, with the U.S. anticipated to be the largest market for the compact models.