New Car Sales Soar in May 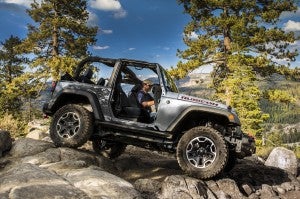 Jeep Wranger saw its best May sales ever last month. The Jeep brand overall was up 58% during the period.

Buoyed by fantastic weather and a fifth weekend for dealers to move metal, new vehicle sales during demonstrated renewed strength in May.

Those factors helped Jeep post its best monthly sales in history and led General Motors to predict it would gain marketshare this year.

Chrysler Group reported a 17% increase the Jeep brand’s 58% resulted in its best sales month ever. Chrysler Group extended its streak of year-over-year sales gains to 50 consecutive months in May.

“Our Jeep sport-utility vehicles and Ram pickups continued to do well in May as our dealers reported brisk May sales over five weekends and the Memorial Day holiday,” said Reid Bigland, head of U.S. Sales.

Despite the ongoing recall controversy, GM reported a 13% sales increase compared to a year ago, marking the company’s best May in seven years and its best total sales since August 2008. Retail sales increased 10% while fleet sales were up 21% and GM expects to increase its total market share year over year, said Kurt McNeil, U.S. vice president of sales operations.

“The momentum we generated in April carried into May, with all four brands performing well in a growing economy and 17 vehicle lines posting double-digit retail sales increases or better,” McNeil said.

Despite predictions the company’s sales would decline Ford posted a 3% increase from a year ago. Retail sales set several model records with 174,889 vehicles sold – an increase of 6%.

“Fusion and Escape had their best months ever, which helped us to our strongest May result since May 2004,” said John Felice, Ford vice president, U.S. Marketing, Sales and Service. “Explorer continued to gain ground in the midsize utility segment with its best monthly sales performance in nearly 10 years, while Lincoln MKZ saw its best May ever.”

(Click Here for details on the obstacles facing driverless cars.)

Toyota also reported a 12.6% sales increase, while Audi sales went up 25% and Hyundai reported record sales for May.

(To see more from the UAW convention in Detroit, Click Here.)