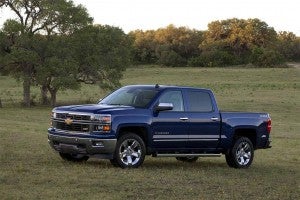 Trucks are hot sellers these days, in some measure because they are getting better gas mileage than ever.

With new cars and trucks getting better gas mileage than ever and new vehicle sales hitting record highs, it’s no surprise that consumers expect their new purchases to continue to be more fuel efficient.

The Consumer Federation of America (CFA) released the results of its annual report today, which found that new vehicles are not only more economical, but also consumers are in favor of the fuel-efficiency rules helping to usher these vehicles to the market.

“Consumers want and expect the vehicles they intend to purchase to get significantly higher fuel economy,” said Mark Cooper, CFA’s director of research. “Many Americans struggle to live within their budgets, and a large majority are troubled about future gasoline prices.”

In a recent survey, 80% of those surveyed said that “in thinking about the next five years,” they were “concerned” about gasoline prices with 64% indicating “great” concern.

The biggest obstacle facing automakers is the federal mandate requiring automakers corporate average fuel economy (CAFE) to be 54.5 mpg. Currently, the 14 major automakers in the U.S. are averaging 25.6 mpg for the 2014 model year. That is up 20% since the CFA began tracking the information for its first report in 2008, when it reported the average was 21 mpg.

The improvement has a tangible benefit to consumers: they’ve save $300 annually on fuel costs during that time, even though gas was cheaper in 2008 than it is today, Cooper said, adding that consumers expected a similar improvement in the next six years.

While the primary impetus for improving fuel economy may have been spurred by federal mandate, the approval for the push cuts across party lines: 76% of Republicans, 83% of Independents and 89% of Democrats favor the standards, the report stated.

Helping the makers along is increase in the number of hybrids available in the market place and a growing acceptance on the part of consumers of more powerful four cylinder engines, Cooper said.

“Ten years ago the Prius was a rare niche product,” he said. “Nowadays hybrids are a mainline product.”

In part because of prevalence of these new factors, it appears the 2025 mandate is within reach.

(Click Here for more about gas prices rising due to unrest in Iraq.)

“Car manufacturers are well on their way to meet the 2025 fuel economy standards,” said Jack Gillis, CFA’s director of public affairs. “Because the new federal standards are in line with consumer demand, carmakers understand that meeting those standards is one of the best ways to ensure market success in the future.”

Overall, in 2014, Mazda, Subaru, and Honda stand out as having the highest percentage of models compliant with 2014 standards among manufacturers with multiple vehicle models. Eighty percent of Mazda models, 52% of Subaru models and 51% of Honda models met the 2014 requirements, the report noted.